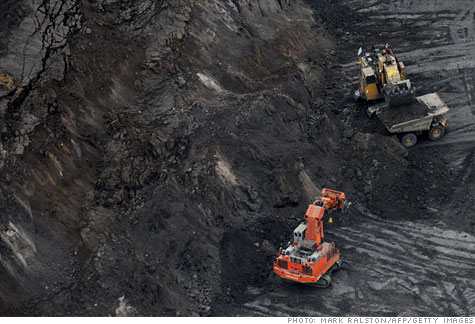 FORTUNE -- BP needs low-hanging fossil fuel fruit. After the Deepwater Horizon disaster in the Gulf, the company has tarnished its offshore exploration reputation. Also, the company is selling assets to free up $30 billion in cash by the end of 2011.

So it's time for BP to get unconventional. BP (BP) got the all clear signal from partner Husky Energy to start moving on the Sunrise oil project in Alberta Canada. BP bought 50 % of the Sunrise project back in 2007, and now plans to fund the first $2.5 billion of the project, the Financial Times reports, since it's time to start developing.

"This peaked at the right time," says Fadel Gheit, a senior analyst with Oppenheimer & Co., Inc. "It will open another growth wedge for them that they didn't have before."

Traditionally, BP has steered clear of gleaning petroleum products from the oil sands in North America's frozen north. Part of that, Gheit says, is because BP has considered itself an exploration company above all else. "Exploration is always the sexy part of the business -- it's high risk."

But now, Canadian tar sands are starting to look much more attractive to the oil giant. Unlike wells designed to pump crude, oil sands don't have the same production decline rate. Oil sand deposits are easier to access than crude from offshore wells. Deposits sit on top of the earth, and they're composed of clay, sand and a dense form of petroleum that clumps like sod and crumbles.

The heavy petroleum in deposits is expensive to process, and companies need several years to fully develop profitable drilling* and production facilities. "It's just a very boring operation, it's like watching grass grow," Gheit says. "But once you get it developed, it's a piggy bank."

Oil companies can produce Canadian tar sands for under $30 per barrel. That's plenty profitable if the market price of oil stays at $60-$70 per barrel. Oil sand deposits can consistently produce petroleum products for around 50 years.

That kind of economic benefit can't be ignored, says Pavel Molchanov, a research analyst with Raymond James & Associates. Besides its exploratory reputation, BP also held off on developing tar sand assets because of resistance from activist shareholders who were concerned about the environmental impacts. Processing tar sands produces a high concentration of greenhouse gasses and can generate toxic waste products that pose an environmental risk.

"Before the oil spill, BP was cultivating an image of a very environmentally progressive, socially responsible, civic-minded oil company," Molchanov says."Of course, that got pretty much destroyed." The company, if not embracing its darker image, at least seems to be finding ways to capitalize on it.

But Molchanov predicts that the potential money coming out of this project will convince most shareholders to put concerns over image aside. BP's budget is tighter this year, Gheit says, and while other oil companies are looking into Iraq, that poses security risks that Canada doesn't. "The Canadian oil sands, are probably generating $15-20 profit [per barrel] and nobody's going to shoot at them. So why go to Iraq when you can go to Canada?"

Other big oil companies are already there. "You can not compare BP to Shell (RDSA) or Exxon (XOM, Fortune 500) who produce hundreds of thousands of barrels from Canada," Gheit says. "This is a first step in a very long journey." BP is well-situated to start shipping from Alberta, also, because they own portions of oil transportation company Enbridge's pipeline that runs right to Chicago.

Not that BP will turn its attention from offshore. The company is still the leading driller in the Gulf, and operates more leases there than any other company. But choosing Canadian oil sands as the first major project since the spill is a smart move, says Gheit. It will make money, Canada's government is stable and friendly and there will be no need for remote-operated underwater robots to shut down a faulty blowout preventer.

*Note: an earlier version of this story referred to the time it would take to build facilities at the Sunrise site, including mining. In fact, the Sunrise project is in-situ and will rely on drilling facilities for extraction.

Mötley Crüe, brought to you by BP

Facebook's false choice: What it should have done to preserve trust
Subscribe to Fortune
First Published: December 2, 2010: 1:06 PM ET