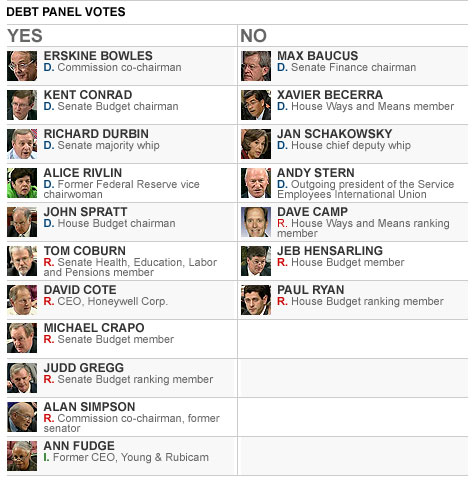 In a strong bipartisan showing, 11 of 18 members voted yes. Five Democrats, five Republicans and one independent voted in favor of the panel's debt-reduction plan. Those who voted against it included four Democrats and three Republicans.

But the result still fell short of the 14 votes needed in order for the commission to present its recommendations to Congress for a legislative vote.

No matter, said Dave Kendall, senior fellow for health and fiscal policy at Third Way, a moderate progressive think tank. " A majority ... that's huge. The president can say to Congress, 'We got 11 votes. We know we can do this on a bipartisan basis.' "

Indeed, said Sen. Kent Conrad, one of the Democrats who voted for the plan, "this book is going to be read again."

A Democrat who voted against the plan -- former union leader Andy Stern -- nevertheless said because more than 60% of the commission voted in favor, "this plan deserves a vote [in Congress]."

At the very least, the commission's final report will provide lawmakers a comprehensive framework for how to tackle the problem of reining in debt, and some of their ideas may find their way into future budgets.

It's certainly likely some of them will make their way into the president's 2012 budget proposal, which is due out in February.

"If we want an America that can compete for the jobs of tomorrow, we simply cannot allow our nation to be dragged down by our debt," Obama said in a statement.

He promised that he and his economic team "will study closely [the specific recommendations in the commission's report] in the coming weeks as we develop our budget and our priorities for the coming year."

Just which proposals show up in his budget are the question.

The group's final report -- called "The Moment of Truth" -- includes a wide range of suggested spending cuts and tax changes that would slash $4 trillion from projected deficits between now and 2020. The panel's co-chairmen, Erskine Bowles and Alan Simpson, said all along they would not let any part of the federal budget be treated as a sacred cow

Their recommendations include a radical overhaul of the tax code, changes to Social Security and substantial cuts in defense and discretionary spending

Overall the panel's plan would reduce the country's accumulated debt to 40% of the overall economy by 2035, down from the 185% currently projected.