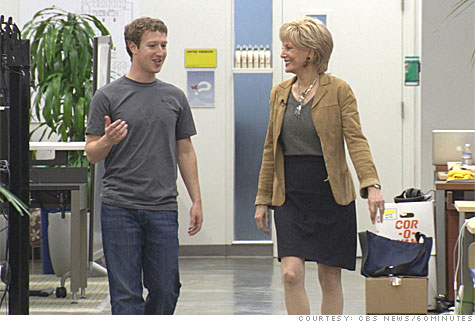 In an interview with 60 Minutes' Lesley Stahl, Facebook founder Mark Zuckerberg previewed the site's profile page changes and fielded questions about an assortment of hot-button issues. By Stacy Cowley, tech editorDecember 6, 2010: 7:13 AM ET

NEW YORK (CNNMoney.com) -- Your personal Facebook page is about to get a major revamp. Facebook on Sunday began rolling out a new design for members' profile pages, integrating in one place information currently scattered throughout the Wall, photo albums and other sections of the site.

The overhaul, previewed Sunday night on 60 Minutes, aims to transform what's now a jumbled collection of details into a streamlined window on who you are and what you're up to. A new "bio" space at the top offers a quick overview, and a more-prominent photo section spotlights images you've recently posted and photos of you tagged by your friends.

Another new feature pulls up a history of your relationship with any of your Facebook friends, showing details like comments you've exchanged and events you've attended together. It's an expansion of a feature Facebook launched in late October.

"You can see all the things that you have in common with that person," Facebook founder and CEO Mark Zuckerberg told 60 Minutes interviewer Lesley Stahl. "It gives you this amazing connection with that person in a way that the current version of the profile that we have today just doesn't do."

The new design will roll out gradually and reach all users by early next year, Facebook said Sunday in a blog post describing the changes. Those who want to upgrade immediately can do so at //www.facebook.com/about/profile/.

Zuckerberg's wide-ranging 60 Minutes interview touched on a number of Facebook's hot-button issues, including the frequent flare-ups around how it handles private data. A Wall Street Journal investigation two months ago illustrated that many of Facebook's most popular applications transmit personally identifying information on their users to advertising and tracking companies -- a violation of Facebook's policies, but one it does little to police.

Pressed on that point by Stahl, Zuckerberg fell back on the "it's against our polices" defense. Facebook shuts down the applications it catches violating those rules, he said.

Regulators and lawmakers are growing more concerned about how companies like Facebook guard their users' privacy, and are considering new rules and mandates. It's an area where Zuckerberg acknowledges having made mistakes: "Do we get it right all the time? No! But it's something that we take really seriously, and every day we come to work and just try to do a good job on this."

No phone -- and no IPO news: Zuckerberg flatly denied one persistent Facebook rumor: The company has no plans for a Facebook-branded phone, he said. Instead, it's working on software to run on all phones.

He also struck a deeply skeptical tone about the value of going public. Asked if Facebook will ever have an IPO, he answered: "Maybe."

"Here's the way that I think about it. A lot of people who, I think, build startups or companies think that selling the company or going public is this endpoint. Right, it's like you win when you go public," Zuckerberg said. "And that's just not how I see it."

Zuckerberg often acknowledges his missteps, but there's one major decision he thinks history has proven him right on.

"We had this opportunity to sell the company to Yahoo for a billion dollars. And we turned that down. I think a lot of people at the time thought we should sell the company," he said. "But you know, I felt really strongly. And I -- I think, like, now, people generally think that that was a good decision."

Take note, Groupon: Saying no can pay off!

Facebook CEO has "made every mistake you can make"