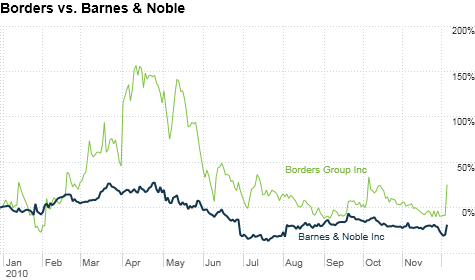 Ackman said Pershing Square Capital Management, which holds a 15% stake in Borders, is prepared to bid $16 per share in an all-cash or stock-and-cash transaction, representing a 20% premium on Barnes & Noble's closing price of $13.28 last Friday.

Barnes & Noble put itself up for sale in August, saying its shares were "significantly undervalued." The company's stock value has plunged more than 30% this year.

At the time, the bookseller's founder and largest shareholder Leonard Riggio said he might join an investor group to buy Barnes & Noble.

Barnes & Noble puts itself up for sales