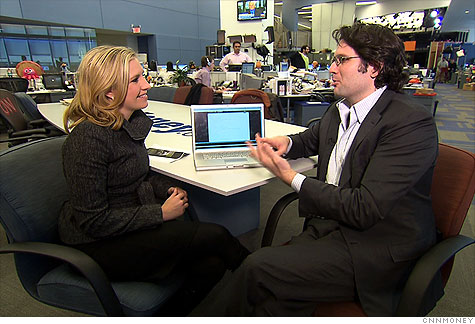 NEW YORK (CNNMoney.com) -- Two simple pieces of data -- your name and e-mail address -- can unlock a shocking number of details about you, even if you consider yourself to be a very private person who carefully guards your online identity.

Yet starting with only those two bits of information, Poppy's e-mail and name, a privacy researcher's searches across multiple online databases turned up information she found startlingly personal: Her father died of cancer at a young age. She has a half-brother. She's Episcopalian. She's not married. She and her father both went to Columbia University. She rents her apartment. Poppy is a nickname.

Then, there was the more private stuff. Her birthday. Years-old photos with friends. Her shopping habits. And some guesstimates about her salary and her family's financial background -- inaccurate ones, it turned out.

That's a lot of information about someone who values her privacy so much. Imagine what the Internet knows about people who aren't as careful.

ReputationDefender, an online privacy company, compiled the dossier on Poppy at CNNMoney's request to illustrate just how much information is lurking around online -- hidden, but accessible to those motivated to go hunt it down. ReputationDefender does not create or sell these dossiers on people; instead, its business is selling consumers tools to control their online personal data.

But other companies are gathering up those personal details and creating similar dossiers for commercial gain. Called "data miners" or "aggregators," they crawl the Web scooping up tidbits.

Much of what they collect is public information from things like voter registration records and telephone books, but the real treasure trove comes from social networks, which provide photos, interests, activities and a list of your friends. The most advanced aggregators can even tie your Web browsing behavior to your online profile.

One individual source of information may not be all that revealing -- but when you tie multiple sources together, you can paint a pretty detailed picture. Your Amazon.com (AMZN, Fortune 500) wish list, public Facebook profile, Pandora playlists and Picasa albums individually may not say much about you, but your name, shopping habits, list of friends, musical tastes and photographs combined say a lot about who you are.

Companies like Acxiom, Rapleaf, Spokeo, Intelius, Merlin Information Services and PeopleFinders have built businesses around compiling and selling that information. Rapleaf and Klout even score your ability to influence others on the Web. (Poppy rates a 42 out of 100 on Klout's influence scale. One of Klout's top influencers, President Obama, scores an 86.)

Right now, those profiles and scores are sold primarily to direct marketers and political campaigns, but insurance companies and prospective employers are starting to use the technology too. Privacy experts say the market for information will keep expanding -- as will the amount of data that can be collected about you.

"Dossiers will be built on each of us in the future in a much more intimate way," said Michael Fertik, ReputationDefender' CEO. "This will be used for much more far-reaching and invasive things than advertising."

So if hiring, firing, insurance or even dating decisions are going to be made about us based on our online profiles, what's especially scary is that a lot of the information collected about us is incorrect.

The address ReputationDefender found for Poppy was five years old, her phone number was completely wrong, and her salary information was way off (though Poppy says she'd love to make as much as the search results thought she did).

But even more disturbing are some of the conclusions an automated algorithm could make about Poppy based on online associations with her name. Bankruptcy, prescription drug abuse, Wall Street and Detroit were some of the most frequent words associated with her name -- all because she reports on those subjects daily.

"No one looks underneath your credit score to find out why it is what it is," Fertik said. "Accurate or inaccurate, life decisions are being based on your online personal information. It's going to define you forever."