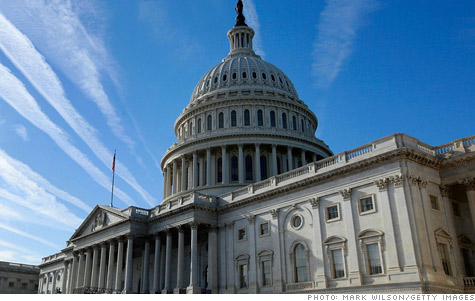 NEW YORK (CNNMoney) -- Stock up on lint rollers, because the fiscal fur is going to fly when the 112th Congress gets under way Wednesday.

A number of contentious tax and spending issues are on the docket, and factions within each party are ready for battle.

The fight over spending is likely to come to a head by March. That's when temporary funding for the government expires and when the country's debt load will be very close to surpassing the legal debt limit. (Senators: 'Put up or shut up on debt')

President Obama, who said he expects "tough fights ahead," has promised that his fiscal year 2012 budget proposal would challenge lawmakers who are "hollering about deficits and debt" to step up because he was going to "call their bluff."

His proposal is likely to be previewed in his State of the Union address before being submitted to Congress around Feb. 14.

But fiscal policy experts whom CNNMoney contacted are not expecting the president to knock their socks off with his deficit reduction proposals.

They expect he will call for general entitlement reform but offer few specifics on how to address the biggest long-term debt drivers -- health care costs and the aging of the baby boom.

They do believe he will propose some important deficit-reduction measures, but modest ones such as a multi-year freeze on discretionary spending, which is one third of the federal budget.

"I expect [his proposal] to do more to rein in future budget deficits. Not sure if that will constitute bluff-calling though," said Donald Marron, a former acting director of the Congressional Budget Office.

Even if the president's budget proposals happily surprise deficit hawks, there's no guarantee Congress will adopt them. Or even pass a budget for the 2012 fiscal year.

Failing to agree on a full-year budget, Congress passed four stop-gap measures to keep the government funded temporarily. The fourth one expires March 4.

Republicans have pledged to cut federal spending to 2008 levels. They haven't said how they'd do it.

Budget experts told CNNMoney they are dubious that Republicans can achieve that goal.

"I'm not even sure they know what they mean by that," said Robert Bixby, executive director of the Concord Coalition, a deficit watchdog group. "This is one where the fine print will need examination to see if it supports the rhetoric."

Even if Republicans succeed in passing a bill to knock spending back to 2008 levels, some budget experts doubt the president would sign such steep cuts if they go into effect immediately given the fragile economic recovery.

Perhaps the crucible in the budget fight will be a vote over whether to raise the country's debt limit -- currently $14.294 trillion. The last time it was raised was in February 2010.

If the ceiling were ever breached, the country would effectively be in default. That would slam bonds, the dollar and creditors' portfolios.

Fiscally conservative lawmakers may use the opportunity of the upcoming debt ceiling vote to demand spending cuts in exchange for their support.

The budget experts CNNMoney contacted were divided on just how "meaningful" any quid pro quo spending cuts would be. But many believe a deal could include budget process reforms along with a cap on discretionary spending or a spending freeze.

And some are a little concerned that the public sparring over the issue could spook markets.

"I expect the debt ceiling [debate] to be all-out war," said Len Burman, a professor at the Maxwell School at Syracuse University.

No one CNNMoney contacted expected an overhaul of the federal income tax code to be enacted in 2011. Many said enactment in 2013 is more likely.

But they all expect that a tax overhaul will be debated in 2011, given that the president, the president's debt commission, the Federal Reserve chairman, a bipartisan group of 18 senators and the incoming chairman of the House tax-writing committee have been calling for it.

What proponents of tax reform appear to agree on: Income rates can be greatly lowered if the hundreds of tax breaks in the code are streamlined -- with some being reduced in value and many being eliminated altogether.

What proponents will tussle over is just how low those rates should go, which tax breaks should be curbed or eliminated, and whether tax reform should aim to raise more revenue than the current system or the same amount.

The bipartisan group of senators angling for tax reform wants it to be part of a comprehensive debt-reduction package. And they want the Senate to pass such a package by the end of 2011. The leaders of the group said they will introduce as legislation the president's debt commission plan to get the conversation started.

Meanwhile in the House, incoming Budget Committee Chairman Paul Ryan was a member of that commission but voted against the plan. Nevertheless, he has said he plans to incorporate 85% of it into the 2012 budget proposed by his committee.

'Put up or shut up' on debt - senator