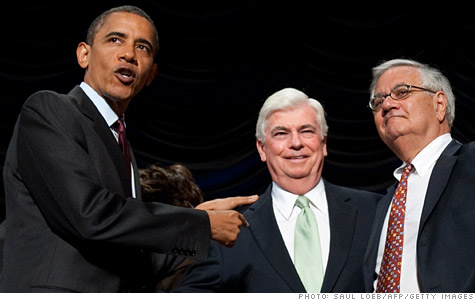 NEW YORK (CNNMoney) -- The Securities and Exchange Commission is so cash-strapped that it has delayed key parts of the financial reform bill passed last year by Congress -- and is curtailing some of its normal operations.

The Dodd-Frank Wall Street reform law gave the SEC lots of new responsibilities, including the regulation of complex derivatives and asset-backed securities. And it expected Congress to pay for it -- projecting that SEC funding would need to double to about $2.25 billion by 2015.

But Congress has so far failed to pony up any of the money.

As a result, the agency has delayed the creation of five key offices mandated by Dodd-Frank, including a new office of women and minority inclusion and a whistle blower office. Those responsibilities are being spread among existing staff.

Currently, the agency is diverting money from other activities to fund its implementation of Dodd-Frank, which has led to a strain on normal operations.

"Operating under [the current budget] is already forcing the agency to delay or cut back enforcement and market oversight efforts," SEC spokesman John Nester said in a statement to CNNMoney. "The longer we operate under significant budgetary restrictions, the greater the impact."

Already, the SEC has been forced to postpone depositions in some enforcement cases.

"The lack of funding means they [the SEC] cannot carry out their responsibilities," said Rep. Barney Frank, the Massachusetts Democrat whose name the legislation bears. "It's in nobody's interest -- except people who want to screw around."

Last year, SEC Chairwoman Mary Schapiro testified that the Wall Street reform bill would require hiring 800 new staffers. That hasn't happened. In fact, the agency has had trouble hiring even one.

The funding woes have spread to non Dodd-Frank matters.

After last year's "flash crash" -- in which the Dow Jones industrial average plunged nearly 1,000 points before recovering -- the SEC sought to hire five experts on the complex trading algorithm that was suspected to have triggered the crash.

The agency posted the jobs online, and received more than 1,000 applications. But due to a lack of funding, the positions couldn't be filled for months. The agency was finally able to make its first hire in just the last few weeks, Nester said.

"The SEC has always been pretty lean in terms of staffing," said Bruce Carton, a former counsel with the SEC's Division of Enforcement who now edits a website called Securities Docket. "I've worked in a big firm, and certainly the SEC has less support and technology. There is just no money."

The SEC's funding trouble is nothing new. The agency has struggled in recent years to keep up with ever-more complex markets, and has not made the technological investments required to keep up with sophisticated investors.

"While the markets were growing exponentially in size and complexity during the last several years, the SEC's workforce actually decreased and its technology fell further behind," Schapiro testified last year.

The agency is required to lay out a bevy of proposals over how the law will be implemented over the next few months. But spending levels are locked in until March, when the so-called continuing resolution the government is operating under expires.

At that point, SEC funding might become part of the larger fight over the massive budget deficit. Democrats are hoping to authorize more funding, while Republicans -- some of whom would like to repeal the legislation -- will be looking for places to slash spending.

The chief objection of Republicans is that the law's regulations are too heavy handed, and will stymie economic growth as the nation climbs out of recession.

Rep. Spencer Bachus, the Alabama Republican who now chairs the House Financial Services Committee, warned in November that an overly strict interpretation of the legislation will spark a "mass exodus" of clients from U.S. banks to their competitors abroad.

If Republicans are able to roll back some -- or all -- of the legislation, it would be a major blow to the Obama administration, which counts the law as one of its signature victories.

Frank says Democrats will defend the legislation, and push for full funding.

"I have to say I'm skeptical that the GOP and Tea Party want to go before their constituents and say they defunded the regulation of derivatives," he said.