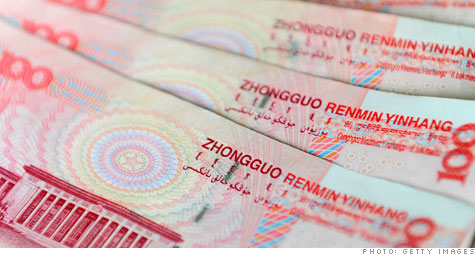 NEW YORK (CNNMoney) -- China is allowing U.S. currency traders to have a crack at its tightly controlled currency, the yuan, but analysts say the move will have more impact on international politics than markets.

"It's a peace offering to the rest of the world," said Dean Popplewell, chief currency strategist at the Toronto office of the Oanda Corp., a currency trading services company.

The announcement comes just one week before Chinese President Hu Jintao is expected to visit Washington on Jan. 19, and China's currency controls will likely be high on the agenda.

"Most individuals from the dealer side see it more as a political move ahead of Washington next week, some type of appeasement to take the spotlight off the yuan itself," Popplewell said.

While the yuan is already traded by U.S.-based traders through Hong Kong markets, this is the first time the government-controlled Bank of China is allowing U.S. customers to buy yuan directly. Traders will be able to withdraw up to $4,000 worth of yuan per day from Bank of China's New York City branch, at a maximum of $20,000 per year.

But the move is not expected to have much of an effect on the yuan's value.

"It's a sort of a first step but I would imagine it's a political move more than anything," said David Morrison, market strategist at the currency trading company GFT in London.

"Every time the U.S. government has gotten close to calling the Chinese a currency manipulator, China has done something to put the U.S. on a back foot. This is really a very, very minor concession to dampen down the anti-Chinese rhetoric about manipulating their currency."

"We believe it is in China's interest to allow the currency to appreciate more rapidly in response to market forces," said Geithner.

Morrison said the yuan is worth more on Wednesday, with the U.S. dollar worth 6.6128 yuan, compared to the close on Tuesday, when the dollar was worth 6.62 yuan. If the yuan's value continues to rise, then traders could benefit.

"We fully expect continued [yuan] appreciation, and note that the yuan has been very strong this week after a weak start to the year," wrote Win Thin, global head of emerging markets strategy for Brown Brothers Harriman, in a note to investors. "The yuan often sees outsize gains just before major summits, and so gains are likely to continue over the next week."

But analysts said it's unlikely that U.S. traders will be able to impact the value of the Chinese currency if Beijing is still holding the reins.

"The Chinese have a very, very strict control over it," said Morrison. "I don't think that being able to get one's hands on the yuan in cash terms is going to affect the trading of it."