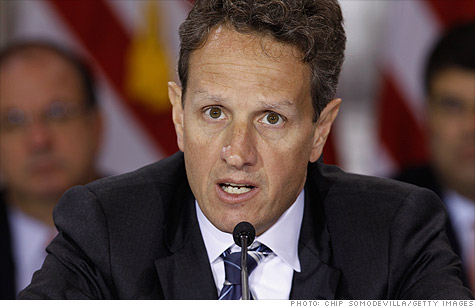 NEW YORK (CNNMoney) -- Treasury Secretary Timothy Geithner said China's undervalued currency and dependence on exports must be addressed, both for the sake of the Chinese and global economy.

But he's confident that such changes will take place.

In remarks delivered at Johns Hopkins' School of Advanced International Studies, Geithner outlined the U.S. negotiating position with China ahead of the visit to Washington next week by Chinese President Hu Jintao.

Geithner said China's policies are a growing source of concern in the United States and other countries, and Chinese leaders understand the need to make changes.

"The Chinese leadership recognizes that China is now too large relative to the world economy for it to continue to rely on foreign demand to grow," said Geithner.

One of the drivers of Chinese exports is its undervalued currency. The Chinese government has been accused of keeping its currency, the yuan, pegged to the dollar, in order to keep its exports cheap.

Geithner acknowledged that the Chinese had allowed the yuan to rise at about a 6% annual rate since June, but said that is not enough.

"We believe it is in China's interest to allow the currency to appreciate more rapidly in response to market forces. And we believe China will do so because the alternative will be too costly -- both for China and China's relationship with the rest of the world," Geithner said.

In negotiations with the United States, China has asked for the same terms of access to U.S. markets that developed economies enjoy, among other requests. And while Geithner said the United States is willing to move on those requests, it needs to see more reforms from China first.

He complimented China on running a very effective and ambitious course of financial reforms over the last thirty years, which gives him confidence that further changes will be made.

"I have a very good relationship with and great admiration for Vice Premier Wang Qishan. He faces a lot of opposition in China. But it will work itself out. Over time, China has no choice but to move," he said.

Geithner said higher inflation in China is making U.S. goods more competitive there, offsetting the advantage of the cheaper yuan.

"[A rise in the yuan's value] is going to happen. There is no alternative path. The only choice for China is how it happens, I think there's substantial recognition of that within the Chinese leadership," he said in response to a question after his speech.

China's consumer prices rose 5.1% in the 12 months ending in November, driven by a nearly 12% jump in food prices. That's far higher than the 1.1% rise in U.S. consumer prices over the same period.

Geithner cited a number of other areas of concern to U.S. policymakers, including access to Chinese markets by U.S. companies and protecting intellectual property rights. But he said it's natural that much of the public attention is focused on the exchange rate.

"The exchange rate is something you can see, you can look at how fast it's moving," he said. "Since [the yuan] is obviously undervalued, it becomes a focus of concern about fairness."

Geithner said it's wrong to blame China for job losses or other U.S. economic problems, which is a typical reaction during times of economic stress.

"We look at the ascent of others as a concern, as a threat," he said in response to a question. "It's important to put that in context and recognize how well we do as a nation depends on choices we make in the United States."