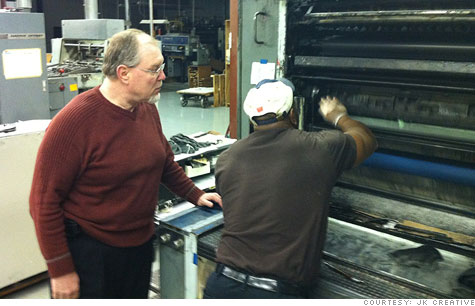 Mike Nobis, left, who owns an Illinois printing company, says the recent corporate income tax hike will prevent him from investing in his business. By Tami Luhby, senior writerJanuary 13, 2011: 8:26 AM ET

Faced with a daunting $13 billion budget deficit, state legislators opted to raise personal and corporate income taxes. Companies will now have to pay a 7% corporate tax rate for the next four years, up from the previous 4.8%. And Illinois businesses are already subject to a 2.5% surcharge.

Gov. Pat Quinn said that putting the state on a sound financial footing will improve economic growth. But at a time when sales are still suffering from the economic malaise, the hike may prompt some companies to relocate or deter them from investing.

"We'll definitely not be hiring, that's for sure," said Mike Nobis, president of JK Creative Printers & Mailing, which generates about $4 million in revenue a year. "We just don't have the margins anymore to do anything major."

Nobis said the tax increase means he won't be able to invest in his 103-year-old printing business in Quincy, Ill. He's not sure yet how much more he'll have to pay, but it will have an impact.

After seeing his sales and profits decline during the Great Recession, Nobis shortened his workers' hours to 32 per week. He was hoping to bring them back to 40 hours a week this year, but probably can't afford to now.

And forget about adding to his payroll or buying new equipment, he said.

While Nobis said he can't afford to move his operations to a lower-cost state, other companies may opt to relocate.

"It means the best growth business in the state of Illinois will be moving companies," said John Tillman, chief executive officer of the Illinois Policy Institute, a non-partisan, free-market think tank. Businesses "will have less working capital."

The tax increase has vaulted Illinois into the top ranks of states with the highest corporate rates, said Joe Henchman, director of state projects for The Tax Foundation. It will now have the third highest rate, up from the 21st highest previously.

Not helping matters are the state's high sales taxes and property levies, Henchman said. Its formerly low personal income tax rate offset the other levies, but now Illinois no longer has that advantage.

Along with the corporate tax hike, lawmakers raised the personal income tax rate to 5%, up from 3%. That means a family of three with a household income of $60,000 will pay an additional $1,080 in levies, Tillman said.

Making the situation even worse is that Illinois is not promptly paying vendors or sending corporate tax refund checks because of its fiscal mess, said Doug Whitley, head of the Illinois Chamber of Commerce. It owes companies nearly $1 million in refunds, he said.

"Democrats have created a terrible climate for businesses in the state," said Pat Brady, chairman of the Illinois Republican Party, which staunchly opposed the tax hikes.

State legislators were faced with two "terrible choices," said Steve Brown, a spokesman for Illinois House Speaker Michael Madigan, a Democrat. They opted to raise taxes rather than cut spending. Also, as part of the package, lawmakers placed a 2% cap on spending growth and authorized $3.7 billion in borrowing to make a pension payment.

The tax increases shouldn't scare away businesses, he said. In fact, companies have been moving to the state.

"On balance, people still believe Illinois is a pretty good place to be," Brown said.

Quinn, the governor, feels that the tax hikes will restore the state's fiscal stability, which will foster economic growth, a spokeswoman said. Since he took office two years ago, the state has created more jobs than any other in the Midwest, she said.

But neighboring states are already trying to capitalize on the Illinois tax hike, hoping to lure businesses to their side of the border. Wisconsin's new governor, Scott Walker, is urging Illinois companies to "escape to Wisconsin," promising to enact tax relief, a job-friendly legal environment, fewer regulations and expanded tax credits.

Meanwhile, Indiana Gov. Mitch Daniels, who has long tried to entice firms across state lines, is ramping up his message of the welcoming business climate in the Hoosier State. His latest tactic: Making fun of his neighbors for hiking taxes.

"It's like living next door to 'The Simpsons', you know the dysfunctional family down the block?" he said on a radio show this week.