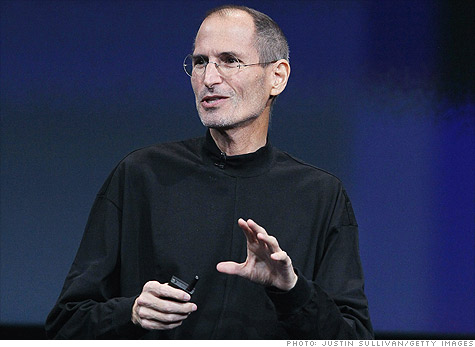 NEW YORK (CNNMoney) -- Apple CEO Steve Jobs will take another medical leave of absence beginning on Monday, two years after a six-month sabbatical during which he received a liver transplant.

Tim Cook, Apple's chief operating officer, will take over the company's day-to-day operations in Jobs' stead, as he did during Jobs' last leave of absence.

"At my request, the board of directors has granted me a medical leave of absence so I can focus on my health," Jobs told Apple employees in an internal memo. "I will continue as CEO and be involved in major strategic decisions for the company. I love Apple so much and hope to be back as soon as I can. In the meantime, my family and I would deeply appreciate respect for our privacy."

Jobs, who is 55 years old, gave no timetable for his return, but noted that Cook would execute the "plans the company has in place for 2011."

The Apple (AAPL, Fortune 500) CEO's health has been a topic of intense speculation for several years. In 2004, he was diagnosed with a treatable form of pancreatic cancer, and he has appeared much thinner in subsequent appearances.

In August 2008, Bloomberg mistakenly published an obituary of the CEO.

Jobs did not deliver his annual keynote address at the Macworld conference in December 2008, and he announced he would take a six-month leave of absence from January 2009 through June of that year. He later revealed that he had received a liver transplant during his absence.

Jobs did not appear at a Verizon (VZ, Fortune 500) event last week at which the wireless company announced that it would begin carrying the iPhone in February.

His last Apple press conference was in mid-July, following the "antennagate" controversy that had many iPhone 4 owners complaining about lost reception when they held their phones a certain way. In the press conference, Jobs offered a free case to anyone who bought an iPhone 4 in the first three months it was on sale.

Two of his last public appearances took place on Oct. 7, when the CEO attended a ceremony commemorating a California bill that created an organ donor registry. He followed that with an appearance at an awards event hosted by the Wireless History Foundation.

An anticipated public appearance by Jobs was scheduled for this week, as News Corp. was expected to unveil The Daily, an iPad-only news magazine. That event was postponed on Friday, but it is not clear if that had anything to do with Jobs' health situation.

Apple performed very well during Jobs' last leave of absence, as its stock price rose nearly 60% during the six months that Cook oversaw the day-to-day operations of the company. Apple's board awarded Cook a $5 million cash bonus last year in recognition of his "outstanding performance" running Apple during Jobs' 2009 leave of absence.

The U.S. stock market is closed Monday, so investors weren't able to immediately react to Jobs' annoucement. The last times the company announced a medical leave for Jobs, shares fell as much as 6% on the news but ended the day down only 2%.

Apple will on Tuesday report its financial results for its most recent quarter, which ended Dec. 31. Analysts and investors are eagerly awaiting details on how many iPads Apple sold during the tablet's first holiday season.

Steve Jobs: 'I was almost one of the ones that died waiting for a liver'

How much will Apple stock fall on Tuesday?

Tim Cook: The genius behind Steve

The decade of Steve