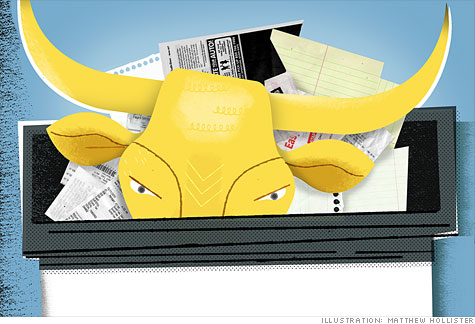 FORTUNE -- Feeling a little disillusioned lately? That's not a bad thing if you're an entrepreneur. There's nothing like humbling economic times to force chief executives to let go of the sacred-cow ideas and grandiose illusions they've been harboring and start building on reality. Some of the smartest business owners I know have fallen for these five myths. Ditch them. It will make your business that much stronger.

1. Gross margins will grow as you get bigger

Not so. My research shows that they typically dip. That was a tough lesson for Jennifer Olsen Welding, who owns a 70-employee Salt Lake City casting company. Her tale: Unlimited Designs won a municipal contract to create a precast building façade in 2009. The trouble was, the $5 million company had to lease extra equipment to do the job. Sales increased significantly, and gross margins declined by 3%. "We would have been better off having no revenue than the revenue that was coming in," she says.

Baloney! When Steven Krane tried to get Wal-Mart (WMT, Fortune 500) to carry Raw Essentials, a line of skin-care products he developed with model Carol Alt, the giant retailer expressed doubts about the marketing muscle of his Boca Raton, Fla., firm. So Krane dared to call the president of Hard Candy, a competitor that had successfully launched its makeup in Wal-Mart, to get advice. It turned out that Hard Candy was interested in discussing some joint ventures. Krane also got some critical tips on building his social-media presence.

3. You really know your market

Gathering real data may prove you wrong. Dave McLurg, chief strategy officer and partner at Adaptive Technologies in Scottsdale, was certain that only big companies wanted his firm's software, which helps users predict which clients will be the most profitable. But surprise! After encountering a midsize firm that wanted something like it, he undertook market research that showed that others did too -- only for a lower price -- and launched a new version. "It's turned into a multimillion-dollar division for us that we hadn't anticipated," he says.

John Warrillow took on endless custom projects at Warrillow, a firm that helped big companies market themselves to smaller ones. Revenues didn't grow because Warrillow was the only one with enough experience to write custom proposals. In 2005 he relaunched the firm, offering one-size-fits-all research and events that clients could purchase by subscription. Providing one product was more profitable, he found, than doing custom jobs. "We went from being flat on the top line to growing at a rate of 25% to 30% a year," he says.

Despite regular team meetings, Bettina Hein, CEO of Pixability, a Cambridge, Mass., company that helps customers market themselves on video, was the last to find out that an instructional video added to the company's site had saved her team 135 hours of customer-service time, worth $8,000 to $10,000 a month. No one thought to mention it to her. "Only in a casual conversation did it emerge," she says. She's now rushing to create 60 more. Had she known, she would have launched the new ones sooner and saved even more money.

--Verne Harnish is the CEO of Gazelles Inc., an executive education firm.

Help Desk
Track testing tires to find the best
Find out how TireRack tests and reviews tires and why choosing the right ones for your car is so important. Play
Markets
Data as of Jan 17
Data as of 9:34am ET
Sponsored by
Sponsors
Sections