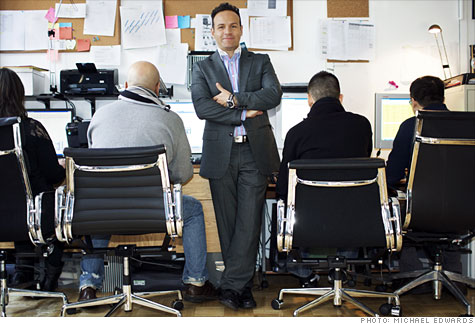 FORTUNE -- In late 2009, just as Goldman Sachs was being widely slammed for showering billions in bonuses on its employees after receiving a massive federal bailout during the financial crisis, the investment bank announced -- coincidentally or not -- that it was committing $500 million over five years to help small businesses in distressed urban and rural communities across America. Called "10,000 Small Businesses," the program would combine practical business training with loans delivered through community lending institutions. Goldman assembled a distinguished advisory board led by Berkshire Hathaway (BRKA, Fortune 500) chairman Warren Buffett, the bank's biggest investor, and Harvard Business School professor Michael Porter, who is well-known for his research on inner city entrepreneurship. The program then dropped out of the news.

One year later, Goldman's gift is yielding modest but tangible results. So far, more than 100 business owners in New York City and Los Angeles have completed a 20-week course that covers accounting, marketing, negotiation, and similar topics (participants take a full day of classes every other Saturday, applying each week's lessons to their businesses). Nearly 50 small businesses nationwide have been approved for loans financed by Goldman and administered by mainly nonprofit community lenders (because it isn't a small-business lender, Goldman relies on local institutions to administer the loans). So far, Goldman has spent about $60 million on the program.

The program is competitive -- nearly 400 people applied for spots last year -- and not for dreamers. To be eligible, applicants must run companies with at least four full-time employees, have been in business for at least two years, and have revenues from $150,000 to $4 million. (Email here for more information.)

So what's in it for Goldman Sachs (GS, Fortune 500), apart from the obvious PR dividend? It's tempting to be cynical about the motives of a bank that made out during the meltdown. For their part, Goldman officials acknowledge only the most diffuse self-interest in launching 10,000 Small Businesses.

"The program and our business are well aligned," says Dina Habib Powell, 37, a former assistant secretary of state in the Bush administration who now runs the Goldman Sachs Foundation. "In both, we are obviously focused on economic growth. And small businesses are one of the smartest investments to drive growth in communities in the U.S."

The logic behind the program is simple: It makes sense to invest in small-business education because small businesses employ half of all private sector workers in this country and have generated 65% of all net new jobs over the past 17 years, according to the Small Business Administration. "We're looking for businesses that can scale," says Porter, whose nonprofit Initiative for a Competitive Inner City is responsible for selecting entrepreneurs to join the program. "All the data show that's where the real job creation happens."

One such job creator is Daniel Levy of Manhattan Home Design, who completed the first 10,000 Small Businesses course at LaGuardia Community College in Queens, N.Y. A classic serial entrepreneur, Levy started out raising tropical fish in his bedroom and selling them to schoolmates in Buenos Aires when he was 7 years old. Now 36, Levy launched Manhattan Home Design, an online retailer that specializes in contemporary furniture, four years ago with $500 in startup capital. Today he represents about 40 furniture brands and also manufactures his own furniture in China. Levy's products are sold on some 30 partner sites, including eBay (EBAY, Fortune 500) and Amazon (AMZN, Fortune 500). Manhattan Home Design has six employees and grossed nearly $500,000 last year.

"It was a small-business owner's dream," Levy says of the program. Especially useful: teaching him how to navigate New York City's procurement bureaucracy, which helped him land a $200,000 contract to provide bistro tables and chairs for a new city public-space project.

Entrepreneurs need solid negotiating chops, and graduates of the program praise this aspect in particular. Buffett himself calls it a key element. "I learned to negotiate by watching my dad when I was 7 or 8 years old, but not everyone gets that exposure," he says. "Members of this program have gotten better deals as a result of their training."

William Sanchez can vouch for that. Sanchez, 37, runs Technical Digital Services, a family-owned printing business based in the Woodside neighborhood of Queens. He says the sales and negotiating skills he learned in the Goldman Sachs program helped him score a major printing contract with a university in the New York area. It also taught him to zero in on a crucial point in the negotiation process: He convinced the university to insert a contract clause stipulating that he could renegotiate prices annually based on fluctuations in the price of paper and other materials. "My attitude used to be that I had to give big clients everything they wanted," he says. "The class taught me that both sides can walk away from a negotiation with a positive outcome."

Sanchez now needs expansion capital to fulfill that contract, and the program came through with that too, providing a $350,000 loan from Seedco Financial, Goldman's lending partner in New York City. Sanchez says he will use part of the money to revamp his main facility and set up a satellite location near the university. All told, he says, the lessons he learned in class helped him boost his company's revenues by 30% over 20 weeks.

For Rosalie Safier, the takeaway was in marketing. Safier, 56, runs National Van Equipment, a manufacturer of blankets and pads for the moving industry, in Long Island City, N.Y. Like many low-tech U.S. manufacturers, Safier had been steadily losing ground to Chinese competitors. Safier says the course taught her to think strategically about product marketing and the importance of diversifying her business; it also helped her create an appealing narrative about her company. National Van Equipment now sells a full range of packing equipment, including boxes, tape, and stretch wrap -- and the company's new marketing materials stress its made-in-the-U.S.A. credentials and green supply chain. "We buy textile remnants and seconds from U.S. mills, things that would otherwise end up in a landfill," Safier says. Annual sales through November were up by 40% over 2009.

Perhaps the most unusual feature of 10,000 Small Businesses is that it's a national economic development initiative based almost entirely in the private sector. Goldman is putting up the money and partnering with local community colleges and lenders to deliver training and capital. Government is conspicuously absent from the mix. "That's a different model of economic development than is the norm here and around the world," says Porter. "What we're uniquely good at in this country is bottom-up development, where individual companies take responsibility for doing things."

Nevertheless, the Obama administration has taken note of Goldman's small-business-development efforts. "It fits our economic development goals perfectly," says White House senior adviser Valerie Jarrett, who spoke at the graduation ceremony for the first 10,000 Small Businesses class. "The President's No. 1 goal is to create jobs and grow the U.S. economy. Giving small-business owners the tools they need to grow leverages our efforts to create an environment where all businesses can grow."

Empowering small businesses is an idea that's thrown around a lot on the talk-show circuit as the job market continues to stagnate. Will Goldman and its partners be able to make a difference? Goldman says it will measure results of the program in terms of revenue growth and job creation. It is still about 9,800 shy of the 10,000 entrepreneurs it hopes to educate, but the program has four years remaining; new programs will soon launch in Long Beach and New Orleans.

For his part, Porter hopes Goldman's money and networking mojo will catalyze a new entrepreneurial ecosystem built around community institutions, banks, and businesses. And Buffett focuses on the program's potential to change lives for the better. "Who knows how far it goes?" he asks. "But I know it will help a great many individuals achieve goals that they wouldn't have otherwise."