Wendy's puts Arby's up for sale 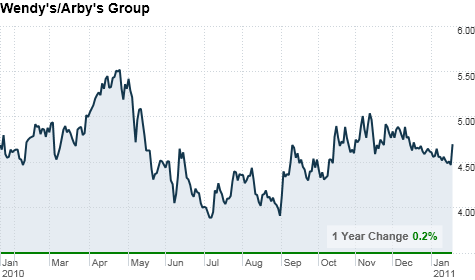 Sales at Arby's North American restaurants open at least 15 months fell 5.9% during the third fiscal quarter, following a 7.4% drop in the second quarter and an 11.5% decline in the first quarter.

Wendy's/Arby's (WEN) chairman Nelson Peltz said "the reality is that the Wendy's brand, given its relative size and scope, is the key driver of shareholder return, and we believe we should focus on the execution of the compelling growth opportunities at Wendy's."

The company said it is working with UBS Investment Bank to explore "strategic alternatives" for Arby's, including a sale of the chain.

Last year, Peltz said he and his hedge fund, Trian Fund Management, which together hold a 22% stake in Wendy's/Arby's, were considering selling the restaurant group after receiving an "oral inquiry" from an unnamed party about a possible acquisition.

In 2006, Peltz pushed successfully for a spin-off of the Tim Hortons (THI) coffee chain and sale of ancillary brands, including Baja Fresh.