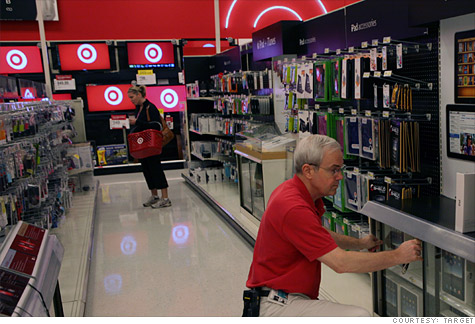 FORTUNE -- Sometimes the best thing retailers can do these days is hand over part of their store to someone else.

Sears is carving out about 15% of the square footage its Costa Mesa, California store to house the much trendier retailer Forever 21. Target (TGT, Fortune 500) will have 1,450 Radio Shack-run mobile phone shops in its stores by the end of June. And Wal-Mart Realty says it has almost 400 in-store leases ready for some well-matched retailer who sees the benefit of letting "Wal-Mart's repeat customers become [their] repeat customers." Wal-Mart (WMT, Fortune 500) has a lot of competition, as Sears Holdings (SHLD, Fortune 500) is offers thousands more such sub-lease opportunities within its own Sears and Kmart stores.

Wounded by a slump that continues to batter department stores despite a recent surge in sales at other retailers, many large U.S. chains are making similar arrangements. All are drawn to the idea that partnering with specialized retailers and manufacturers can help them fill holes in their product offerings and help them profit from hot trends more quickly. A number of these retail chains are moving beyond just letting the other company build and sometimes staff a space within their stores; in search of a more stable revenue source during these trying times, they are becoming something of a mall -- leasing the square footage to their partners as well.

"For brick and mortar retailers, the recent Sears/Forever 21 arrangement, and Target's expanding relationship with Radio Shack (RSH, Fortune 500) are only indicative of things to come," says Z. John Zhang, a professor of marketing at University of Pennsylvania's Wharton School. He adds that "Sears has a worn out, old-timer image and obviously wants to make sure young people have a chance to again see how good it is," while the Radio Shack partnership allows Target to "acquire different capabilities quickly."

Retailers in Europe and Asia have used the concept extensively -- nearly all major Chinese retailers are really a conglomeration of ever-changing smaller stores which stand up in competition, or are pruned from the landscape.

A variation of the shop-within-a-store arrangement is also driving much of the growth of online retailing. Almost 80% of the products sold by Amazon (AMZN, Fortune 500), for instance, come from outside sellers who handle their own wares, set their own prices and provide their own customer service, says Kinshuk Jerath, a marketing professor at Carnegie Mellon University's Tepper School of Business. Sears.com has recently started "Marketplace at Sears," based on the same concept. Apple (AAPL, Fortune 500) has forced a similar model on the ebook industry, providing a platform for publishers, but leaving it up to them what to offer and what to charge consumers.

Welcome to the new mini-mall

But the concept has been gaining renewed acceptance among a variety of brick and mortar retailers in the United States as well. There was a flurry of these deals among such retailers last year. Besides Forever 21, Sears Holding Corp worked out in-store leases with Edwin Watts Golf Shops, Work 'N Gear, a uniform apparel store, and the Whole Foods (WFMI, Fortune 500) organic grocery chain, among others. Macy's (M, Fortune 500) has continued to expand relationships with partners like Sunglass Hut, Destination Modernity, and Lush, a UK toiletries concern. Bloomingdales is negotiating deals that would cede square footage to several luxury brands including Jimmy Choo, and Reiss, a hip UK-based clothier.

It's not just about saving money. "The one thing retailers are really struggling with at the moment is figuring out how they can create more compelling environments by building alliances with other companies," explains Wendy Liebmann, CEO of WSL Strategic Retail, adding that retailers know they must offer a sense of uniqueness "to get shoppers back into stores."

Chains that have chosen not to rent out their space often make it look as if they did, building branded mini-stores for their partners and leaving the venture up to them to run. Jones Apparel (JNY), whose brands include Nine West and Anne Klein, staffs branded boutiques in several department stores. The sales consultants in Apple boutiques within Best Buy (BBY, Fortune 500) are often from Apple as well.

Radio Shack, which has had rental arrangements with partners before, currently staffs the Target Mobile kiosks with its own distinct black-shirted employees, owns the inventory, uses its own point of sales system and recognizes the revenues from all sales.

This partnership allows Radio Shack to expand its distribution without having to add more physical stores. Radio Shack, in turn, lets Target leverage its "expertise within the mobile retailing business," says Kristy Welker, a spokeswoman for Target, adding that customers "have responded very favorably to the in-store experience, selection, and pricing."

J.C. Pennny Co. (JCP, Fortune 500) uses a number of less-encompassing licensing arrangements to put providers such as Sephora cosmetics and Aldo shoes in branded shops within its stores. Liz Thorpe, vice president of Murray's Cheese notes that a similar arrangement with Kroger (KR, Fortune 500) has put her tiny 70-year-old Manhattan-based company on the map. The Murray's-branded shops at 23 Kroger stores are stocked with cheese picked and sourced by Murray's, and they are staffed by specially-trained cheese mongers who wear Murray's signature red-jacketed uniform. The end of 2012 will see a minimum of 50 more Murray's in-store shops installed.

Consumers benefit from such partnerships. Carnegie Mellon's Jerath says his research shows the partnerships generally increase service while decreasing the retail price of goods, particularly when the partner pays the chain in the form of rent instead of profits.

There are some risks. A bad partnership can damage a brand. But mistakes can usually be rectified fairly quickly. And, when a lease is involved, department stores can generally take comfort in knowing that they are making the spread -- the difference between what the smaller partner pays for the space and what the chain pays its own landlord.

Of course, not every retail chain wants to advertise that somebody else is handling a portion of its purchases or that it is leasing out sections of its store. Wal-Mart, Bloomingdales and Best Buy all declined to comment on their use of the strategy, with a Best Buy representative writing that the company "would prefer not to discuss" it.

Location: Don't buy all the hype (yet)