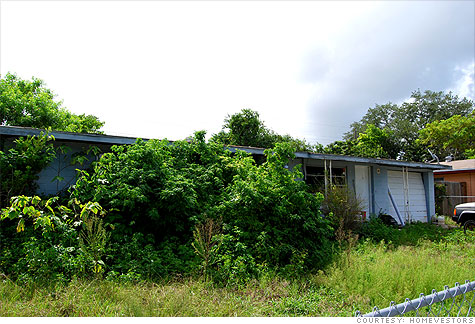 NEW YORK (CNNMoney) -- You've heard of McMansions, but what about Frankenhouses?

These are homes that have been "renovated" to feature things like pipes running through living rooms, bedrooms strung together like garlic cloves, and fluorescent floors.

It's scary what people do to their homes.

HomeVestors -- famous for its "We Buy Ugly Homes" billboards -- specializes in buying these homes that no one else would want. In fact, they're often so bad that they have to label listings as "for investors only" because they're not suited to ordinary buyers.

For example, those pipes running through the living room? They would have to be completely redone before the house could even get inspected.

"We get a lot of the houses after real estate agents have given up on them," said David Hicks, CEO of HomeVestors.

He calls them horror houses and marvels at some of things that former owners must have thought were brilliant ideas at the time. Here are some of the worst creations he's found:

Dysfunctional floor plans: Someone needed more bedroom space so they added on, but it messed up the traffic flow. It was much worse than just having to walk through one bedroom to get to another. "You had to walk from the living room through a bedroom to get to the kitchen," said Hicks.

Imagine stumbling through Grandma's boudoir whenever you hungered for a late-night snack.

5 bedrooms - 1 bath: It's a hard sale when the house has many more bedrooms than baths. Five full bedrooms with a single bath, for instance, makes the morning traffic jam very tough.

It's even harder if the bath is completely misplaced. HomeVestors bought a house where there were three bedrooms on the second floor and two on the third, a total of five. Yet there was a single bath located in the basement.

"It ends up looking really bad," said Hicks, "and you don't even have a garage anymore."

Big kitchen - no living room: Some homeowners have hobbies or interests that they devote major floor space to -- at the expense of everything else.

"One owner converted the living room into a huge kitchen," said Hicks. "They had a great kitchen, complete with a huge island, but no living room."

Bedrooms with no closets: This can evolve in a couple of ways: The previous owner could have removed closets to increase the bedroom's floor space or added bedrooms to a house where there was too little room for closets.

Whatever the cause the effect on buyers is negative. Read my lips: People want closet space. Look at the homes-for-sale ads. What do they say: "Great closet space."

Really bad colors: An awful color scheme may turn off homebuyers so much that they are blind to the home's other virtues. "We got one house that had multi-colored, neon-bright floor tiles in the entryway," said Hicks.

Buyers entered in, they exited out.

Jungle fever: Everybody loves trees and shrubs, but let it get too lush and it turns into a problem.

"When the vegetation starts to block the light and make the interior real dark, that's bad," Hicks said.

Missing parts: Neglected houses can look hideous, true, but they can be dangerous as well.

HomeVestors purchased what was basically a nice old place in Hampton Roads, Va., but it had several issues, the worst of which was an outside basement entrance to nowhere -- except basement. It was essentially just a big open pit.

Make money in 2011: Buy a home
Find homes for sale

Help Desk
Track testing tires to find the best
Find out how TireRack tests and reviews tires and why choosing the right ones for your car is so important. Play
Markets
Data as of 6:45pm ET
Data as of 4:10pm ET
Sponsored by
Sections