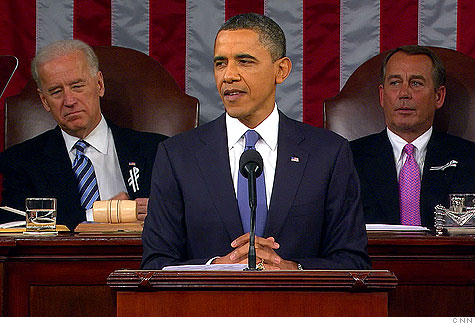 President Obama offered some debt-cutting proposals. He did not spell out a comprehensive plan. By Jeanne Sahadi, senior writerJanuary 26, 2011: 8:00 AM ET

NEW YORK (CNNMoney) -- Last summer President Obama promised to call the bluff of anyone who talks a good game on reducing the national debt but doesn't act.

In his State of the Union address on Tuesday, he offered a few ideas, but didn't spell out a comprehensive plan.

Instead, Obama made a number of proposals and signaled the direction he wants Congress to take.

He called on lawmakers to, among other things, freeze spending in a small part of the federal budget, make strategic investments designed to boost economic competitiveness, simplify the corporate and individual tax codes and ban earmarks.

"[N]ow that the worst of the recession is over, we have to confront the fact that our government spends more than it takes in," Obama said. "That is not sustainable."

But until his 2012 budget proposal is released next month, and until negotiations over spending cuts begin, it won't be clear whether the president is really putting his arms around deficit reduction or merely air-kissing the idea.

Here's a look at the fiscal proposals he made in the State of the Union and their potential impact on the debt.

Last year, Obama called for a three-year freeze on non-security discretionary spending. This year, he upped that request to five years.

Obama noted that his freeze would affect less than 15% of the overall federal budget. That's because it doesn't include money spent on defense, homeland security and veterans.

Also exempt, of course, is so-called "mandatory" spending, which makes up two-thirds of the federal budget and pays for Medicare, Medicaid, Social Security and interest on the debt.

Because it is limited to a very small area of the budget, a domestic discretionary spending freeze isn't likely to make significant headway with the debt on tap.

The White House estimates the freeze could save $400 billion over the next decade.

But those savings may be eaten up by increased spending elsewhere. Former Congressional Budget Office Director Rudolph Penner, for instance, has noted that spending on Medicare and Social Security is scheduled to rise by more than $100 billion every two years.

Interactive: Where our money would go

Indeed, Obama acknowledged that "we have to stop pretending that cutting this kind of spending alone will be enough. It won't."

He then cited the conclusion of the bipartisan debt commission that he created last year: "The only way to tackle our deficit is to cut excessive spending wherever we find it -- in domestic spending, defense spending, health care spending and spending through tax breaks and loopholes."

That is the kind of statement that deficit hawks have wanted to hear the president say publicly. But whether the president and Congress follow through is yet to be seen.

The president wants Congress to invest more money in innovation, infrastructure and education.

To the extent that such investments boost the country's capacity for economic growth and create jobs, that can help reduce deficits because more federal revenue will be generated.

But most fiscal experts say that economic growth by itself or even combined with baby steps on deficits is not going to make a big dent in the long-term debt, since spending on Medicare and Social Security is projected to grow faster than the economy.

Obama indicated that money spent on innovation should be paid for. His proposal to help pay for it: Eliminate various tax breaks for oil companies, which cost roughly $4 billion.

Like some Republicans, Obama wants to ban legislative earmarks and promises to veto any bill that has them.

Doing so may bolster the public's faith that pet projects of powerful lawmakers won't get slipped into unrelated spending bills right before a vote.

But in terms of deficit reduction, banning earmarks -- which represent less than 1% of the total budget -- won't really do bupkus. That's because they don't represent extra spending. They represent spending that lawmakers have already approved for federal agencies.

Fiscal and tax experts have been calling for an overhaul of the entire income tax system for a long time.

Obama focused his comments on corporate tax reform. He said he wants to lower the corporate rate -- one of the highest in the world -- if Congress ends many corporate tax breaks and levels the playing field for all businesses.

What's not clear from the nascent debate is how much revenue a new corporate code would raise: more, less or the same as the current code. Businesses are likely to push for less.

The White House has indicated that it favors tax reform that neither increases nor reduces revenue. And some deficit hawks believe that comprehensive tax reform -- of both the individual and corporate codes -- should raise more.

The president made one mention of reforming individuals' taxes, signaling that "the best thing we could do for all Americans is to simplify the individual tax code."

The idea of tax code reform garners bipartisan support, but there's a lot more dissent when it gets down to the specifics of how.

The president called on Congress to find a bipartisan solution to ensuring the long-term solvency of the most popular government program: Social Security.

But he ruled out options that he doesn't support -- such as cutting benefits for future retirees and investing Social Security taxes in private accounts.

What's not clear, however, is whether he might support other solutions such as a gradual increase in the retirement age -- which his bipartisan debt commission proposed. Also unclear is how heavily he might want to lean on increasing the tax revenue paid into the system.

What budget experts calling for Social Security reform say is that the sooner changes are made the less painful they will be.