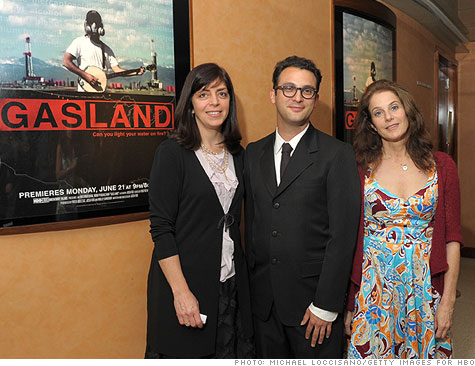 NEW YORK (CNNMoney) -- When "GasLand," a documentary which details the environmental impact of a process called "fracking," came out, it created a public relations nightmare for the natural gas industry.

Now it's going to get worse. That's because "GasLand" is up for an Oscar.

Directed by Josh Fox, the film was nominated in the feature documentary category. Already in rotation on HBO, the movie captured the top prize for documentaries at last year's Sundance Film Festival.

There is no bigger stage than the Academy Awards, and if "GasLand" wins the Oscar, it could give Fox an opportunity to spread the anti-fracking gospel.

"I have a lot of people to thank if I win, but I have been speaking about this every day for a year," Fox said. "I think I would have some things to say on the issue."

The prospect of Fox taking the stage at the Oscars has the natural gas industry -- which insists its methods are safe -- a bit ticked off.

"While it's unfortunate there isn't an Oscar category for propaganda, this nomination is fitting, as the Oscars are aimed at praising pure entertainment among Hollywood's elite," executive director Lee Fuller of industry group Energy In Depth said in a statement.

"Without doubt, the Academy of Motion Picture Arts and Sciences nominated 'Gasland' for its work in the field of art, not science," he quipped.

"The stakes are too high to allow our energy choices to be influenced by the gross and deliberate misrepresentations by this filmmaker who knew the facts and chose to ignore them," he said.

Fracking -- or hydraulic fracturing -- has helped usher in one of the biggest energy booms in U.S. history. It's also generated fear over ground water contamination and other hazards.

For his part, Fox stands by the film, and has set up a website that picks apart industry claims.

The Marcellus Shale, one of the largest natural gas deposits in the nation, extends beneath New York, Pennsylvania, West Virginia, and Ohio.

Natural gas companies use hydraulic fracturing to tap those deposits, and the massive scale of the deposit has set off a modern day gold rush.

People living near the drilling are afraid the process will contaminate their drinking water, and there have been several cases where water supplies have been ruined.

For its part, the natural gas industry has long maintained that fracturing occurs thousands of feet below the water table, far from drinking water. When wells do pass through the water table, the industry goes to great lengths to protect the water by lining the wells with concrete and steel.