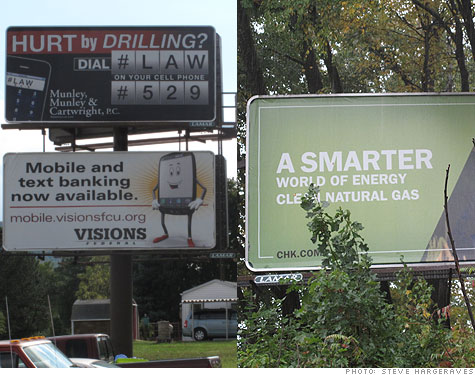 TOWANDA, Pa. (CNNMoney.com) -- In northeast Pennsylvania, the epicenter of one of the biggest energy developments in a generation, there's a battle underway to win hearts and minds.

Throughout the countryside, billboards tout the benefits of natural gas drilling: It's clean. It's domestic. It provides jobs.

The campaign is being waged by the gas companies, who know that not everyone here is happy with the boom in shale gas. People hate the traffic, and they are afraid for their water.

But the campaign is clearly working.

"We might take a little bit of the hurt for it, but it's a good thing for the nation," said Brianna Morales, owner of the BriMarie Inn in Sayre, Pa. "It's a good sense of security."

"It appeals to me to give the whoevers a taste of their own medicine," said Joe Snell, who owns a hardware store in town. "They're been giving it to us for 30 years."

Indeed, natural gas burns cleaner than oil and coal and is produced in the United States.

But some question whether natural gas is really cleaner because of the environmental problems involved in extracting the gas.

Shale development requires companies to truck in water. Those trucks burn a lot of fuel. And natural gas, which is basically methane, is a potent greenhouse gas if it leaks from the well heads or pipelines. Also, chemicals used to fracture the rock have been known to spill contaminating local water supplies.

"It is not at all clear that gas is clean," said Robert Howarth, a Cornell ecologist who is studying the issue. "A complete consideration of all emissions from using natural gas seems likely to make natural gas far less attractive than oil and not significantly better than coal."

But conventional wisdom still holds that gas is cleaner. Maybe not the 50% cleaner that it was once thought, but still significantly better than coal, the mining of which often involves open pits, strip mines or the removal of entire mountain tops, said Dave Hamilton, director for global warming and energy projects at the Sierra Club.

The real questions is this: Can shale gas be developed economically while still protecting the ground water?

So long as natural gas remains below the $6 BTU range, utility analysts say it will be competitive with other energy sources like wind or coal.

Room for profit. Kevin Book, an analyst at ClearView Energy Partners, said regulators could require greater treatment of the fluids used to drill a well and place tighter restrictions on where companies get water.

They could also impose stricter standards for the casing that lines a well hole, expand ground water monitoring and give the federal government a greater role in this process.

All this, said Book, might add between 15 cents and 75 cents per BTU to production costs.

That means there is room for both profit and additional regulation.

Or, as Cambridge's Ineson puts it, additional regulations are "warranted, likely and affordable. You're not going to kill the shale boom on the basis of these costs."

Pennsylvania has recently enacted some of these additional regulations, but not all of them.

Environmentalists are calling for more. They want 3D seismic imaging of drilling areas to detect cracks where the gas could seep into. They also want old wells to be plugged.

It's not known exactly how much these other measures would cost. At some point a balance must be reached between producing shale gas economically and protecting the environment. The hard part is finding it.

Help Desk
Track testing tires to find the best
Find out how TireRack tests and reviews tires and why choosing the right ones for your car is so important. Play
Markets
Data as of 6:29am ET
Data as of 2:44pm ET
Sponsored by
Sponsors
Sections
Approved.blancoo
shargreaves.oblanco