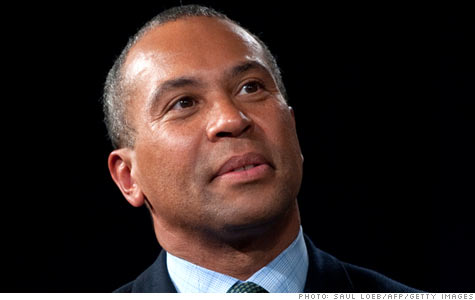 NEW YORK (CNNMoney) -- Massachusetts is bracing for the biggest budget cuts in 20 years...even as its tax revenues are on the rise.

But the news isn't all bad. The budget calls for providing record levels of funding for K-12 education and maintaining its commitment to lower the corporate tax rate to 8.25%, from 8.75%.

Also, the spending plan does not include any tax or fee hikes, but it does take $200 million from the state's rainy day funds. And it assumes tax revenues will rise by $740 million, thanks to the strengthening state economy.

What's hurting the Bay State the most is the disappearance of federal stimulus funds. State officials relied on $1.5 billion in Recovery Act money for fiscal 2011, which ends June 30. In total the state has received $4 billion since the act was passed in February 2009.

Also, while tax revenues are on the rise, they remain far below pre-recession levels. The fiscal 2009 budget assumed $21.4 billion in tax revenues. The fiscal 2012 plan is budgeting only $20.5 billion, which takes into account an additional $1 billion in revenue from a sales tax hike passed in 2009.

"We've turned the corner, but the hole caused by the recession is so deep, it will take some time to get out of it," said Jay Gonzalez, the state's secretary of administration and finance.