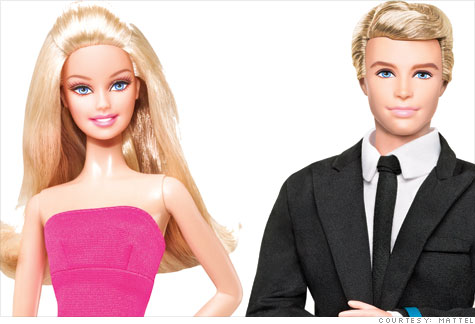 The celebrity toy-couple that shocked the world with their split after 43 years together could be reuniting this year, but only if 'Sweet Talkin' Ken' succeeds in wooing Barbie back. By Parija Kavilanz, senior writerJanuary 27, 2011: 3:45 PM ET

NEW YORK (CNNMoney) -- Ken is on a mission this year. He wants Barbie back.

And he's not holding back in his quest to woo Barbie back -- by Valentine's Day.

Don't be surprised if you see billboards in New York and Los Angeles with Ken professing his renewed love for his ladydoll, declaring "Barbie, you are the only doll for me."

Ken and Barbie fans may also have picked up on the famous exes flirting on Facebook, or noted that Ken checked in on Foursquare at the famous Magnolia Bakery in New York to get special cupcakes for his favorite girl.

Ken's thinks he's the ultimate boyfriend but Barbie fans will have to wait a few more weeks to find out if he succeeds in his quest.

Barbie sales in the United States have improved over the last few years. Now maybe if she decides to take back her "arm candy," Ken could help Barbie become this year's queen of dolls.