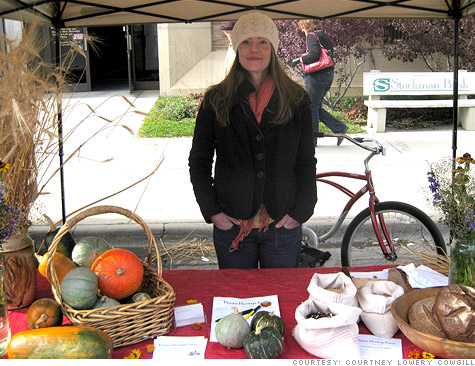 Courtney Lowery Cowgill runs Prairie Heritage Farm, a small organic farm near Conrad, Montana, where she and her husband grow vegetables, turkeys and ancient heritage grains. She also writes a monthly column about farming for New West and the Daily Yonder.

As a farmer, most of my days are filled with the tangible: the green shoots of new seedlings, the softness of a tomato ready to be harvested, the cackle of a flock of turkeys, roosting where they shouldn't.

But farming is as much about the intangible as it is the tangible. Things like cash flow and balance sheets. About your dreams -- and when to take on debt to finance them.

So when my husband and I were first planning our farm, we were sure to make the cash flow just as much a priority as the crop rotation.

We were watching the local-food movement sweep across the country, and we were inspired. We thought those ideas could work at home, too. So, two years ago, we packed up our life in Missoula, I quit my job as the editor of New West, and we moved back home to rural Montana to farm.

We had no money and no assets to leverage. What we did have was a whole lot of people pulling for us. So we asked a handful of friends and family for a loan. We said we would pay them back in three years time with 3% interest.

That's a better deal than they could earn in, say, a CD, and we would pay less for the loan than we would at a bank. Plus, we would have a group of investors to advise, support and cheer us on.

We started with a community-supported agriculture model, which means we have 60 people "subscribe" to our harvest -- i.e. they pay us in the spring for a weekly share of the bounty. That works well, because it gives us start-up capital each spring for seed, poults, irrigation equipment and the like.

For two years, this system has been great to us. Investors are happy. CSA shareholders are happy. We've been doing just dandy as community-supported farmers.

Now, though, we'd like to expand the grains and move toward living on the land we're farming. (Commuting to a farm just doesn't work.) But we need equipment. And we will have to buy a piece of ground instead of just leasing.

It all makes financial sense. The business plan works. But it only works if we go to the bank.

That just terrifies me.

I grew up on a wheat-and-barley farm that trudged through the farm crisis of the 1980s. For a majority of my childhood, the kitchen table was buried in bills. My brother and I knew to get as far away from the house as possible if my parents were in the middle of "doing books."

The pressure of debt -- of equipment loans, of operating loans, of land payments -- was palpable in my family and every other family like mine spread across the American prairie. But to make it in the commodity-driven agriculture economy, you had to get bigger. And to get bigger, you borrowed.

We watched farms around us -- mostly the small ones, but some big ones, too -- crumble under that pressure.

The '80s farm crisis was a good example of how dangerous too much, or the wrong kind of, debt can be. But it's also true that if it weren't for the banks that line the main streets of farm communities across the country, there wouldn't be many farmers on the land at all.

In a perfect world, we wouldn't need an institutional loan to get our farm off the ground. But I've watched too many entrepreneurs try to eke their way through and fail, partly because they were under-capitalized.

So while I'm terrified of taking on debt, I know that the other route can be just as risky.

We recently sat down with our neighborhood agricultural loan officer. He's just about the nicest guy in town, but isn't afraid to tell us how bad things could be if they don't go as planned.

As we walked through those worst-case scenarios, I realized that it's not the debt that's scaring me, it's what the debt means.

It's been easy for me the last two years to think of our farm as an experiment, something we could walk away from. We're young, educated, experienced people. Surely, we could find something else if this failed.

In fact, in convincing me to farm years ago, my husband used just that argument to reassure me we would not end up where my parents were when my childhood farm faltered.

So, I've held an escape route in the forefront of my mind. That is what gave me permission to follow this folly and allowed me to take all the small steps we've taken thus far. It has also, however, kept me from taking big ones, and that's no way to start a business -- or a life for that matter.

It's true that each little decision -- each seed put in the ground and each new customer signed up -- marked another small commitment. And two years later, those have added up to a big one. But if all we ever take are those small risks, we're never going to truly get where we want to go.

So, when we were in the banker's office this month, I had to remind myself that whether or not we take on this debt, we're putting everything on the line. These loans would just be a conduit for the big leap.

And maybe it's time we leapt.