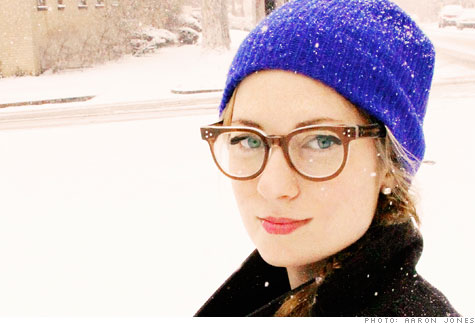 DENVER -- Anna Newell Jones is a freelance photographer based in Denver. She blogs about money and her "spending fast" at And Then She Saved.

I ride the bus. A lot. Usually, twice a day. That has saved me approximately $1,400 over the past year.

In January 2010, I started what I called a spending fast. For a full year, the plan was that I would spend money on necessities only. No more eating out, no more movies, no more shopping, no more "wants". I knew this was going to be intense, and I was also fully prepared for it to suck.

You see, I'm the type that buys what she wants when she wants because I work hard and I feel like I deserve it. I know plenty of people that have the same feelings as I do about work and money and spending and not spending.

But a funny thing happened: I also found myself in debt. $23,605.10 worth of debt, to be exact. I know that amount is not as much as some people's debt, and I know it's more than others. But the point is, it was bad enough for me. My debt was suddenly and horribly overwhelming.

I know why people don't pay off debt. I know why it's easier to pretend it's not there. I know what it feels like to be completely convinced that the debt will never ever, ever get paid off, and that if it did it'd only be because I won some random game show or some Mega Lottery Jackpot that I don't even play.

Debt is overwhelming. When the number gets to a certain point it's kind of like, "Ah, screw it! I might as well enjoy myself because I'll always have this debt."

Amex offered a card to my 3-year-old!

I have been there. I was there just one year ago! But throughout the year of my self-imposed spending fast, I saved $17,911.89. And the majority of my savings are from my "day job" as a clerk for the State of Colorado. Nothing glamorous.

As part of eliminating my expenses, onto the bus I went. After all, most (if not all) money saving/budget/financial experts tell converts to "walk!" "ride the bus!" "ride your bike!"

A perk of my job is a bus pass for only $10 a month. That's way cheaper than getting a monthly parking spot plus gas costs, so I let my husband pretty much have the car that we shared so I could reduce my portion of the car expenses to almost nothing.

My plan worked. Riding the bus daily reminded me that I was doing it for a reason: debt elimination. As I sat there on the bus, I knew I was saving money.

What the experts don't tell you, however, is that the bus is nothing short of a modern-day-rolling-adventure-machine. It is a way to get in touch with all of humanity.

There was this one time when this little kid was just smiling away and pulling the cord so we ended up stopping at every single stop. This could have been super annoying, but she was enjoying herself so much I didn't care.

There was a 4-year-old boy who literally kept asking his dad "Why?" about every single thing we drove past. His dad answered his son's questions so patiently and thoughtfully that it was cool to witness such love.

Of course, the bus has some not-so-savory things about it. Some examples of things that happened to me on the bus:

- A blind man told me that I put on too much perfume.

- The bus jolted and I suddenly realized that a man's butt cheeks were enveloping my shoulder.

- Watching my seat mates pick the zits on each other's faces and then spoon. (You know, spoon spoon. I never knew the bus was such a romantic place.)

- Getting such horrible motion sickness from all the stopping and starting that I threw up. (It barreled out of me like a wild animal and the entire bus gasped. True story.)

Those experiences are just a perk, though, to the main thing: The bus helped me get rid of my debt. And probably more importantly, it helped me to not acquire additional debt.

Because convincing myself to stand in the freezing wet snow and wait for the bus even when I don't want to comes from a deep desire to remain debt free.

Get ready for slightly fatter paychecks