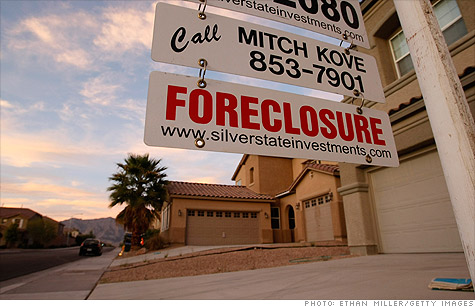 One out of every 9 homes in Sin City received some kind of default notice in 2010, according a report released Thursday by RealtyTrac. That's five times higher than the national average.

But there is a silver lining: The foreclosure rate is actually dropping in Vegas, down 7% compared to the end of 2009.

But even as foreclosures fell in the worst-hit areas, they rose in 72% of the 206 metro areas covered by RealtyTrac's report.

"It really says that the foreclosure problem has spread well beyond the core states," said Rick Sharga, spokesman for RealtyTrac.

Foreclosures have spread beyond the original bubble cities as the economy melted down. Unemployment rates spiked nearly everywhere, and people out of work can't make their mortgage payments.

As a result, there is now a cohort of metro areas that didn't enjoy the housing boom but are now enduring double-digit foreclosure spikes. For example, Houston foreclosures grew by 26% -- the biggest jump by any of the 20 largest metro areas -- to one for every 62 households. The city suffered from a bleak job picture, with unemployment rising to 8.6% in November from 8.1% a year earlier.

Bubble state cities still dominate the top of the list, however, accounting for 19 of the 20 top markets. And the easing in these worst-hit markets may be temporary, said Sharga.

"The servicers are backed up with foreclosures and may have slowed down their actions until they could get the back-up out of the pipeline," he said.

He forecasts a foreclosure rise again in the Sand States this year as banks restart their engines. Overall, he thinks, foreclosures should plateau and stay at about the same level throughout 2012.

"Until jobs come back, we won't see much of a change," he said.