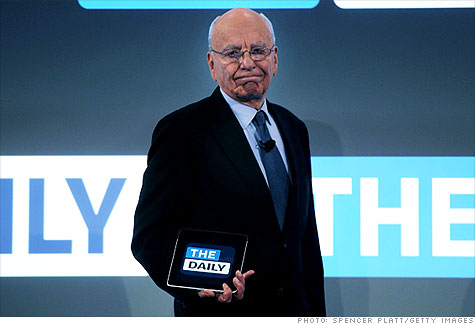 NEW YORK (CNNMoney) -- Media companies are making big bets on tablet-friendly newspapers and magazines -- even as they bleed cash chasing a still-tiny audience.

"I've never seen anything quite like tablets taking off. I don't think you can afford not to make those investments," said Scott Ellison, mobile/connected platforms analyst at IDC.

But the investments are hefty, and fishing in a tablet-only pool is limiting. Apple sold 14.8 million iPads last year, and its nearest rival, Samsung's Galaxy Tab, shipped 2 million devices. That means there's 17 million potential readers at the moment.

Forecasts are bullish for the coming year: Tech companies have a staggering 100-plus iPad rivals in the works, and research firm eMarketer expects total tablet sales to hit 44 million in 2011. In 2012, it predicts tablet sales will top 81 million.

"Clearly the media industry is in need of a transformation, and they see tablets as an opportunity," said Allen Weiner, media analyst at Gartner. "We're about to enter a period of extreme experimentation."

The iPad-only newspaper: The most extreme example is The Daily, the iPad-only publication that News Corp (NWS, Fortune 500) launched on Wednesday. CEO Rupert Murdoch committed around 100 staffers and an investment of $30 million to get it launched, and will spend $26 million a year to keep it running.

"Look at the massive investment News Corp. is making -- how many newspapers are willing and able to do that?" Weiner said. "The Daily is kind of a pilot program that everyone else will look to."

The Daily costs 99 cents a week, or $40 for a yearly subscription. To break even on its operating costs from subscriber revenue alone, The Daily would have to sell more than 650,000 subscriptions -- and that's without accounting for the cut Apple (AAPL, Fortune 500) takes for selling The Daily through its App Store.

Drawing more than 600,000 subscribers would be a gigantic feat, putting the publication among weekday subscription figures for big newspaper stalwarts -- somewhere between The Washington Post's 550,000 and The New York Times' 913,000.

Advertising sales is where publications typically get the bulk of their revenue. But there too, the math is tricky: eMarketer expects total mobile ad spending of $743 million in 2011 and $1 billion in 2012. That cash is spread through thousands of apps, movies, games and other content.

Murdoch will need to capture a significant chunk of it to keep The Daily in the black.

The numbers so far: Wired, Conde Nast's popular technology magazine, made headlines in June when it sold more than 100,000 single-copy iPad issues. But by December, Wired's iPad issue sales had fallen to just 24,000.

"There's a steak-and-sizzle question here," Weiner said. "How much is a one-time, 'check it out' sort of buy, and how much is a sustained audience?"

Glamour, also published by Conde, sold 4,300 digital editions in September, but then sales fell 20% in October -- and another 20% in November. Rodale-owned Men's Health sold just 2,100 digital editions in April, when the iPad debuted. Its tally has fluctuated between the mid-2,000s to the mid-3,000s in the months since.

All of those figures are un-audited, based on data the magazines voluntarily reported to the Audit Bureau of Circulations. Not all publications choose to do so.

"Since it's such a new area, we didn't want to penalize companies for reporting it incorrectly," an ABC representative said.

In its official reports, ABC lumps in tablet issues into a "digital" category along with Web subscriptions. Internet data tracker eMarketer does the same.

"The market is too new [and] too small for a reliable [tablet] breakout," an eMarketer representative said.

Gaining buzz and hooking the marketers: Subscriber revenue is nice, but analysts say advertising is where the real money will be made in the tablet space.

"The nexus of mobility, location and advertising is something the print space has not fully leveraged yet," IDC analyst Ellison said. "There's a lot to be done with advertising."

That rich media potential was what drew airline Virgin Atlantic to sign on as an advertiser in The Daily, said vice president of marketing Simon Bradley.

"We want to be known an an airline that's innovative and does things differently, which is exactly what The Daily has done," Bradley said. "It can be so much more than two-dimensional magazine ads."

"We wanted to get in on the ground floor," Bradley said. "But this a completely experiential platform, so we can always ask: How can we build on this and take it to the next level?"

The iPad newsstand that works