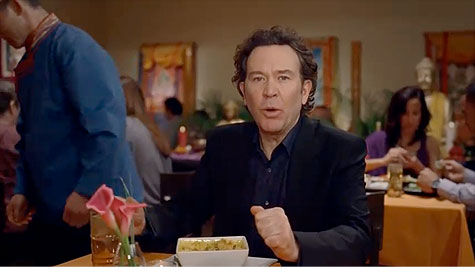 NEW YORK (CNNMoney) -- It's a battle of the daily deal sites -- and this time it played out on the big screen. Right after Groupon secured a Super Bowl ad, rival site LivingSocial snapped up a pre-game spot.

But Groupon may have blown its big moment. Its Super Bowl ads drew a fast and furious online reaction for an irreverence that verged on tastelessness.

The company's spots enlisted celebrity spokespeople for touts related to philanthropic causes. In the most prominent ad, actor Timothy Hutton's message about Tibet quickly veered from charitable to consumerist.

"The people of Tibet are in trouble. Their very culture is in jeopardy," he began. "But they still whip up an amazing fish curry!"

A Cuba Gooding Jr. spot started off with a "save the whales" pitch that segued into a tout for a cut-price whale-watching cruise. And an Elizabeth Hurley segment linked Brazilian deforestation to other kinds of, um, Brazilian "deforestation." (Think waxing.)

"Did #Groupon just make light of the political struggle in Tibet?," Twitter user GlenGilmore wrote in a widely shared reaction. "Who wrote the ad, Kenneth Cole?"

"Groupon seems to have achieved the unique feat of paying $3M to lose customers who previously loved them," advertising blogger Rohit Bhargava, a marketing professor at Georgetown University, tweeted about the ads.

Groupon founder and CEO Andrew Mason says the ads were intended to be tongue-in-cheek.

"Since we grew out of a collective action and philanthropy site (ThePoint.com) and ended up selling coupons, we loved the idea of poking fun at ourselves by talking about discounts as a noble cause," he wrote on the company's blog.

Conceived by ad firm Crispin Porter + Bogusky and directed by mockumentary auteur Christopher Guest, the parodies do tie in to an actual philanthropic push: At SaveTheMoney.org, Groupon is fundraising for Rainforest Action Network, buildOn, and the Tibet Fund and plans to match up to $100,000 in donations to each charity. It's also soliciting contributions to Greenpeace.

But Groupon's televised ads made no mention of that website or the charity drive.

"It surprises me that they would go anywhere near anything as sensitive as Tibet," he said.

In China, the reaction was fast and furious. Just minutes after the ad aired, China's Twitter-like Sina Weibo filled up with more than 28,000 messages about it.

Groupon managed to irritate those on both sides of the polarizing issue: To those who support Tibet's independence, Groupon's message was seen as flippant and callous. For those who back Tibet's being part of China, the ad came across as Groupon interfering in China's internal affairs.

That could cause trouble down the road for globally minded Groupon, which operates in more than 35 countries. It is working with Chinese Internet firm Tencent to set up operations in China.

Dot com deja vu: In shelling out millions for a Super Bowl spot, Groupon is taking a page from the dot-com playbook.

A decade ago, a rash of startups spent millions from their piles of venture-capital cash for pricey spots during the year's most-watched television event.

Some live on in legend: Who could forget Pets.com's sock-puppet sensation? The pet supplies retailer dropped $1.2 million on the ad that made its "spokes-sock" famous -- and less than two weeks later, Pets.com went public.

So as the tech scene starts looking bubbly again, are Groupon and LivingSocial foolishly burning cash?

Steve McKee, president of ad firm McKee Wallwork Cleveland, doesn't think so. He sees one very key difference between Groupon and the dot-com players from a decade ago: a business plan.

But startups like Groupon face a unique branding challenge in crafting a message for a mass audience of millions.

"The dot-com startups were acting like well-established brands, and that you can't do," McKee said. "When you're introducing a new concept to the marketplace, you have to focus more on positioning, rather than personality."

That's a lesson Groupon probably wishes it had taken to heart a bit sooner.