Obama to business: Let's work together 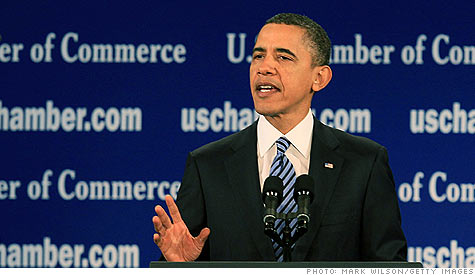 President Obama acknowledged he has had "some pretty strong disagreements" with the Chamber of Commerce. By Charles Riley, staff reporterFebruary 7, 2011: 1:12 PM ET

NEW YORK (CNNMoney) -- President Obama made the case Monday to business leaders that ramping up spending on education and infrastructure will promote economic growth and put the economy back on track.

"We need to out-innovate, out-educate and out-build our competitors," Obama told the U.S. Chamber of Commerce. "We need an economy that's based not on what we consume and borrow from other nations, but what we make and sell around the world."

Obama spoke before 200 members of the U.S. Chamber of Commerce, a group that hasn't always been on friendly terms with the administration, and remains fiercely opposed to the health care and Wall Street reform laws championed by the White House.

The president acknowledged the tensions, telling members of Washington's most powerful business lobby that "we've had some pretty strong disagreements."

But the president also sought common ground, noting that the Chamber supported the 2009 Recovery Act.

"I'm here today because I'm convinced we can and must work together," Obama said, before laying out exactly what he plans to do to help American businesses compete on the global stage.

At the same time, Obama said Washington will keep spending under control, and that he will work with both parties to "take additional steps across the budget to put our nation on sounder fiscal footing."

Obama also said the government needs to reform its own structure, starting with the 12 different agencies that deal with America's exports.

"In the coming months, my administration will develop a proposal to merge, consolidate and reorganize the federal government in a way that best serves the goal of a more competitive America," Obama said.

Monday's meeting is seen as another sign of the thawing relationship between the Obama administration and the business community. It took months to materialize after first being floated by the administration in November.

"I'm here in the interest of being more neighborly," Obama said. "Maybe we would have gotten off on a better foot if I had brought over a fruitcake when we first moved in."

For Obama, it means playing nice with a group that opposed many of his signature policies, and supported Republican candidates with gobs of cash during the midterm elections.

Part of the softer tone struck by Obama was evident in his remarks on the health care reform law.

Obama said he knows the Chamber has concerns about the law, and that he is working to repeal the so-called 1099 provision, a hated IRS rule that imposes new paperwork burdens on businesses.

"I'm also willing to look at other ideas to improve the law, including incentives to improve patient safety and medical malpractice reforms," he added.

At the same time, Obama called out American executives for sitting on cash. He urged corporations to invest the nearly $2 trillion sitting on their balance sheets.

Monday's speech focused on policy, but campaign politics drives many of the differences between Obama and the Chamber.

In 2010, the Chamber bankrolled Republican candidates for Congress. And in the final days of the campaign, Obama accused the Chamber of funneling money from overseas to support GOP candidates.

But shortly after the election, both sides began to sing a different tune. Obama invited 20 CEOs to the White House for a conversation about the economy.