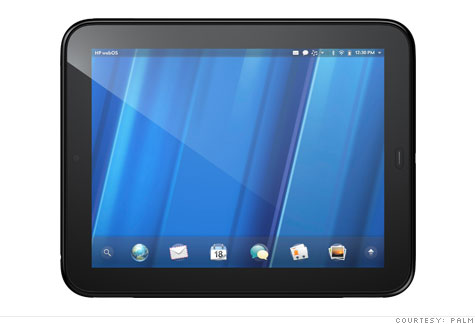 HP's forthcoming TouchPad will be one of the first tablets to match the iPad's screen size. By David Goldman, staff writerFebruary 10, 2011: 12:16 PM ET

The TouchPad comes with an iPad-like 9.7-inch screen, a front-facing camera and weighs 1.6 lbs. It can multitask and sync with other HP devices like smartphones and printers, and it can display Web content encoded with Abobe Flash (something iPads won't do).

Unique features of the TouchPad include a resizeable keyboard and the high-quality "Beats" audio speakers that HP features on many of its laptops.

Slated for release this summer, the Wi-Fi-only version of the TouchPad will be unveiled first, with the 3G and 4G versions hitting the market at a later date.

HP's new smartphones included the Veer, a credit-card sized smartphone with a pull-out keyboard, and its slightly larger cousin, the Palm Pre 3.

HP left out one key detail about the TouchPad: Its price tag. The company plans to announce pricing later.

The devices are the first fruits of HP's $1.2 billion white knight purchase of Palm 10 months ago.

Palm went "all-in" with its then-new webOS operating system when it debuted the Palm Pre in January 2009. Despite rave reviews of the webOS platform, the Pre and its smaller sister, the Pixi, never quite caught on with consumers.

After buying Palm, HP opted to scale up webOS, saying it would eventually become a platform that goes beyond just smartphones. HP will also unveil webOS printers and PCs later on, the company said.

In a direct shot at Apple (AAPL, Fortune 500), HP and Time Inc. plan to make some of Time Inc.'s magazines available for sale under a subscription model. The iPad only currently allows a subscription service for one content provider: News Corp's The Daily. Apple says it is working to expand that offering to other publishers.

But dozens of other tablet makers debuted their designs at this year's Consumer Electronics Show in Las Vegas, hoping to capitalize on the excitement that surrounded the iPad. Motorola (MMI) even advertised its Xoom tablet during the Super Bowl.

DisplaySearch forecasts that there will be 55.7 million tablets sold in 2011.

Tech blog Engadget leaked photos several weeks ago of a nine-inch HP / webOS tablet codenamed "Topaz" and said a seven-inch tablet codenamed "Opal" would also be released. But HP didn't announce anything about a smaller tablet on Wednesday.