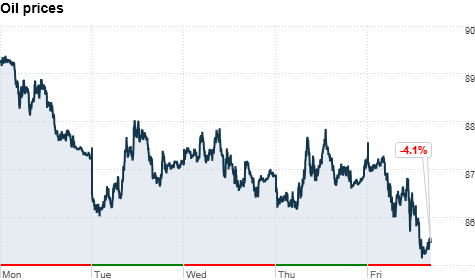 Matt Smith, commodity analyst at Summit Energy, said prices had been rising due to the political unrest and uncertainty in Egypt. But prices fell to their lowest levels in several months as tensions eased.

In the past week, crude oil prices have been fluctuating wildly as tension and political unrest played out overseas

"I do believe when the dust settles, this is a positive thing in Egypt," Flynn said, adding that oil prices could fall further.

Poor weather across the globe and damaged crops also led to a run up in grain prices and other agricultural commodities like cocoa and sugar.

A recent report from IHS Global Insight's Agriculture Service showed food prices are approaching 2008 peaks. Smith added that commodities may continue to head higher over the coming weeks due to Europe's debt worries.

"We're seeing bond yields rise and inflation concerns in Europe so funds are flying into commodities as an inflation hedge," Smith said.

Help Desk
Track testing tires to find the best
Find out how TireRack tests and reviews tires and why choosing the right ones for your car is so important. Play
Markets
Data as of 6:00pm ET
Data as of 2:44pm ET
Sponsored by
Sections