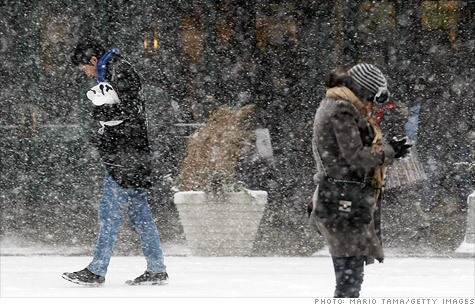 NEW YORK (CNNMoney) -- President Obama's 2012 budget will propose cutting $2.5 billion from a program that helps low-income people cope with high energy costs in the cold of winter and heat of summer, according to a source familiar with the budget process.

The reduction is steep, and might impact millions of families. In 2010, the program received $5.1 billion in federal funds, which were then distributed to states that have both low average incomes and high energy costs.

The administration is quick to point out that the reduction will bring the funding down to $2.57 billion, which is exactly the same as the fiscal year 2008 level.

Before becoming law, the proposal will have to survive a marathon budget process, but Republicans are also calling for cuts to the program, a fact that increases the likelihood of passage.

It's hard to say exactly how many people would be affected by the reduction in funding.

Before the White House plans, first reported by National Journal, leaked to the press, a coalition of Democrats on Capitol Hill led by Rep. Ed Markey of Massachusetts defended the program.

The program currently only serves one of every five eligible people, and a reduction would have dire consequences for those already receiving benefits, Markey said.

"Returning to 2008 funding levels ... would mean forcing 3.1 million families nationwide to return to deciding between heating and eating," Markey said.

In Massachusetts, Markey said the program will help 250,000 residents this year. The state received $175 million in 2010.

Markey's estimate of the impact of the proposed cut is in line with one produced by the American Gas Association, an industry group that represents natural gas companies. Based on data collected from state governments, the group predicts 3.2 million households, and 9 million individuals, will be affected by the administration's proposal.

States with extreme weather and high poverty levels would be hit hardest. In 2010, New York received $479 million, the largest amount of aid. Pennsylvania received $282 million, while Michigan and Illinois both got $233 million.

Members of Congress from those states are sure to fight the cuts. On Friday, a bipartisan group of 31 senators wrote to Obama's budget officials urging them to reconsider.

"To cut this critical funding during one of the coldest winters in recent memory would not only be devastating for the individuals who rely on LIHEAP to keep their families safe and warm, but would serve as a threat to our national economic recovery," wrote Democratic Sen. Jack Reed of Rhode Island, who was joined by Republican Sen. Olympia Snowe of Maine.