Food and gas drive prices up in January 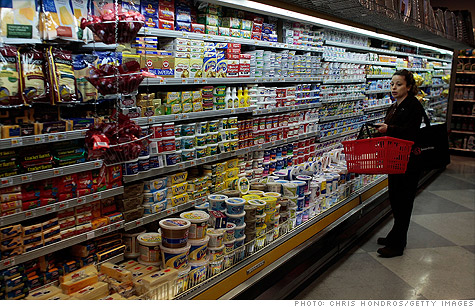 The U.S. Consumer Price Index, a key measure of inflation, increased 1.6% over the past 12 months ending in January, up from 1.5% in December, the Bureau of Labor Statistics said.

Surging gasoline and food prices helped drive the number higher, accounting for two-thirds of the increase.

"If you're the average household, and someone wants to tell you inflation is not an issue, you're probably a little skeptical," said Paul Ballew, chief economist at Nationwide.

For that reason, this report seems a bit "schizophrenic," Ballew said.

Commodities have surged over the last several months, driving up the costs for raw materials, food and energy. But amid high unemployment, businesses are still trying to avoid passing on all those costs.

"In manufacturing, in retail and financial services, you're seeing the need to restrain passing on costs to consumers," Ballew said

Clothing prices increased 1% in January. While that may not sound significant, it is a large jump from December, when apparel prices rose only 0.1%.

And airline fares increased for the fifth month in a row, rising 2.2% in January alone.

"Those are two industries that are very dependent on commodities. For apparel, just look at cotton prices, and airlines are affected by fuel," Ballew said. "This is a reminder to us that commodity prices will at some time affect other categories."

On a monthly basis, the overall CPI rose 0.4% in January, unchanged from the previous month. Economists surveyed by Briefing.com had expected a 0.3% rise in January.

Why inflation hawks are still grounded