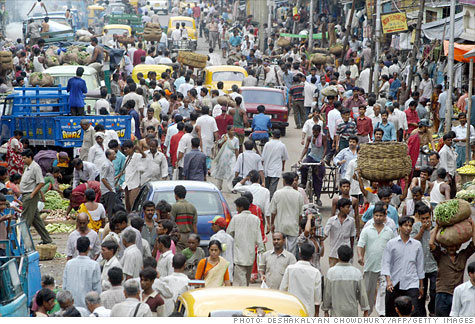 The UN estimates that India's age dependency ratio (the number of working age people supporting children and the elderly) will improve substantially, from 55.6% in 2010 to 47.2% in 2025. China, by contrast, has already reaped the benefit of a large working age population, which will soon begin to age and decline: its dependency ratio will rise from 39.1% in 2010 to 45.8% in 2025. India alone will contribute 26% of the total rise in the world's entire working age population over the next 10 years, thus -- the argument goes -- adding a large number of skilled workers, who will have larger savings, which can in turn be invested in their economy.

India will only be able to take advantage of this "demographic dividend," however, if it can educate its people, move more quickly on long-delayed business reforms, and tackle the environmental consequences of an even larger population.

The Indian government has taken promising steps to improve its inadequate education system, but an enormous amount of work remains. Only 74% of Indian men and 48% of Indian women are literate, compared to 96% (men) and 88% (women) in China. India's much-touted knowledge economy employs only about 2.23 million Indians out of a 750 million strong working population.

Prime Minister Manmohan Singh's government is aware of these deficiencies and has started to implement a series of reforms, including setting aside $60 billion over the next several years to augment the primary education system, tabling bills that allow foreign education providers to operate in India, and others that will facilitate private sector investment in Indian education. Thanks to these reforms, the number of children out of school has dropped from 18 million in 2000 to 5.6 million in 2005, and dropout ratios in primary schools have improved as well.

Even with these promising developments, however, the challenges ahead are daunting: at present, only 12% of India's citizens enter higher education, and the government hopes to increase this to 21% by 2017. The Indian Institutes of Technology -- a group of universities focused on engineering and technology -- are world-renowned, but offer only a miniscule 7,000 places to students each year. The Indian government has identified a skills gap in between 240 -- 250 million persons in the next ten years. Current vocational and technical training schools unfortunately only have the capacity to absorb 1.1 million students a year. Kapil Sibal, the talented and energetic Minister for Human Resource Development has a herculean task ahead.

Indian corporate sector reforms are also only half complete. Despite Prime Minister Singh's admirable efforts, the legendary "license raj" -- the elaborate red tape required to set up and run businesses in India -- is still much in evidence. Again, the government has taken some steps in the right direction: it is actively working to simplify the byzantine tax code, and many new sectors have been opened to foreign direct investment. In spite of these promising steps, India still ranks a low 134 out of 183 countries on the World Bank's Ease of Doing Business Index. For example, the per capita cost of setting up a warehouse in India -- which involves the acquisition of permits and licenses as well as obtaining necessary utilities connections -- is slightly more than four times higher than in China.

Indians are increasingly frustrated at the slow pace of reforms, which the Congress-led government has now promised for the past six years. Speeding up their pace is critical both to make local businesses more efficient, and attract foreign direct investment (which lags far behind foreign investment in China and sank by over 30% in 2010).

Finally, before we celebrate a "demographic dividend," can the Indian subcontinent (and the world) sustain 1.4 billion Indians? Calcutta's population is more than twice as dense as that of New York City. Food inflation currently plagues the Indian economy: onion and other vegetable prices (staples for most poor Indians) are up 71% since last year. Streamlining the agricultural supply chain can help to relieve immediate food shortages, but in the long run, environmental degradation will make it difficult to vastly increase crop yields.

Global warming and the "atmospheric brown cloud" -- a dense smog that permanently hangs over much of India from burning diesel, wood, and dung -- negatively impacts crop yields already. To compound the problem, India suffers from chronic electricity shortages of about 8%. And with a growing middle class buying more TVs, air conditioners and the like, the situation will only get worse. India is already the world's third largest-emitter of greenhouse gases, and that is with is current low per capita emissions rate. One American currently creates almost 13 times as much CO2 per year as one Indian. Combine a more carbon intensive, prosperous economy with a rapidly growing population, and the environmental problems India faces look even more overwhelming than its education and economic challenges.

As desirable as Indian economic growth is -- are India and the planet ready for 1.4 billion more prosperous Indians?

Anja Manuel is a Principal at The RiceHadley Group LLC and a Visiting Scholar at Stanford's Center for International Security and Cooperation.

U.S. to China: Invest in our debt, not our companies