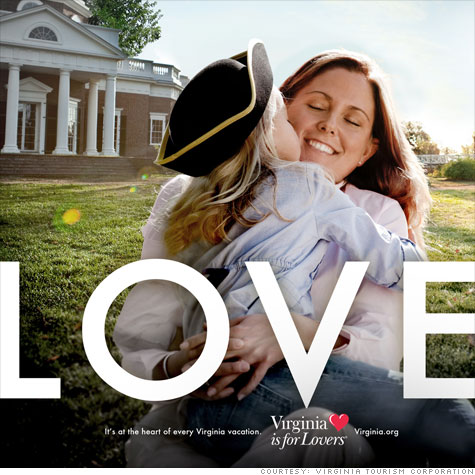 NEW YORK (CNNMoney) -- At a time when states are slashing spending to deal with their staggering budget shortfalls, there's one area they're not cutting from: their state tourism ads.

Think "Virginia is for Lovers," "Connecticut: Closer than you think," and "Explore Minnesota."

In fact, many states are increasing their funding for these campaigns, all in a race to lure the most tourism dollars and create jobs at hotels, restaurants and attractions.

But at the same time, Malloy wants to increase spending by $15 million on Connecticut's tourism ad campaign. The state's tourism commission used to have $4.3 million a year to play with, but after the recession hit, Connecticut cut its marketing budget down to a single dollar in fiscal 2009 and 2010.

It's an investment that "will certainly pay for itself," said the state's secretary of policy and management Benjamin Barnes on Wednesday.

Meanwhile, Michigan's governor Rick Snyder, who is grappling with a $1.4 billion deficit, wants to ramp up the "Pure Michigan" campaign to $25 million this year. At the same time, Michigan is proposing $1.2 billion in cuts to schools, universities and local governments.

The proposal already passed in Michigan's House with overwhelming support, and is expected to fly through the Senate next week.

"At a time when our state has been suffering from a changing world economy, and losses in manufacturing, it's been critically important that we replace those jobs in tourism," said Dave Lorenz, a spokesman for the Pure Michigan campaign. "People understand that we're helping to fill that void."

Nearby Minnesota -- which has a $6.2 billion deficit -- is even considering a 1% sales tax on rental cars to help raise $2.6 million or more dedicated to tourism marketing.

And Virginia -- which was one of the few states to end fiscal 2010 with a budget surplus -- is bringing back its famous "Virginia is for Lovers" commercials this spring. Huge budget cuts forced Virginia to cut back on television spots for the past five years.

While these tourism commercials can often border on cheesy, state tourism directors say they're worth every penny, despite the massive fiscal challenges this year.

"The bottom line is, tourism brings in money," said Tamra Talmadge-Anderson, a spokeswoman for the Virginia Tourism Corporation. "Tourists come to Virginia. They have a wonderful time, they spend, and that money is used to support key services throughout the state."

While these states are hoping investing in tourism will help close part of their budget gaps, one state is bucking the promotional trend.

California, already one of the most traveled-to states, is not investing more taxpayer dollars in its tourism commercials this year. Facing a $25 billion deficit, the government gives its tourism commission just shy of $1 million a year, and has been doing so since 2008.

That said, the agency keeps a $50 million annual budget, funded 98% by private industry partners. And for that reason, it can continue producing some of the splashiest, buzz-worthy ads yet.

Vegas desperate to move past vice