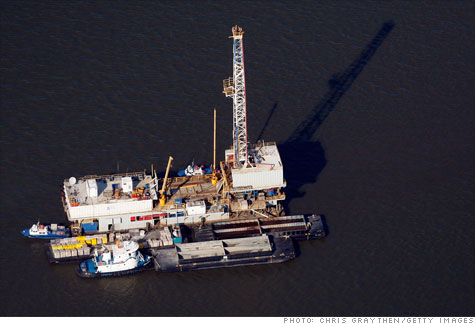 A federal judge in Louisiana says the administration has taken long enough to reform its oversight agency after the BP spill. Gives it 30 days to act. By Steve Hargreaves, senior writerFebruary 21, 2011: 11:14 AM ET

In a case brought by the drilling company Ensco, U.S. District Court for the Eastern District of Louisiana Judge Martin Feldman ruled that the four to nine months the company has waited for a decision on the permits it has a stake in is simply too long.

Feldman acknowledged the difficulty the administration's Bureau of Ocean Energy Management, Regulation and Enforcement has had in implementing new regulations in the wake of the BP disaster, but said the time has come to act.

"The Court therefore orders that [the bureau] is required to act on the five pending permit applications within thirty days of this Order and simultaneously report to the Court its compliance," Feldman wrote in his ruling, issued late Thursday.

A spokeswoman for the agency said it is reviewing the court's decision.

Finger pointing over who's to blame: The government claims it has few pending applications, but the industry says the process is so confusing that companies are hesitant to file them.

The government says it has approved 32 permits for shallow water wells with only 7 pending applications. For deepwater oil wells, the agency says it has only 3 pending permits.

In the Ensco case, the government said four of the five applications are not technically before it. They were sent back to the applicant to correct problems, according to the court ruling.

The applicant said it was never alerted about problems with its requests.

Either way, it's widely known that there is little new drilling activity currently taking place in the Gulf.

The government and other supporters of the go-slow approach contend it's necessary to reform a poorly-managed oversight process that contributed to the BP (BP) disaster, which spewed millions of barrels of oil into the Gulf and was the worst oil spill in U.S. history.

While most of the oil did not wash up onshore, it's unknown how much oil and dispersant still lurk in the deepwater Gulf or what long-term effect they might have on marine life.

But the oil industry and its supporters say the oversight process is much better now, and the permitting delays are costing jobs and lost oil output.

According to the Louisiana Mid-Continent Oil and Gas Association, over 38,000 people are either directly or indirectly employed by the deepwater drill rigs in the Gulf of Mexico. In Louisiana alone, 320,000 depend on the oil and gas industry for work.

It's not known exactly how many people have lost their jobs due to the slowdown in activity. Many companies have kept people employed by doing maintenance drilling work on older wells.

But the nation's second largest shallow-water driller, Seahawk, filed for bankruptcy earlier this month, citing a lack of permits.

The Energy Information Administration estimated the country would lose 74,000 barrels a day in oil production in 2011 as a result of a six-month drilling moratorium.

The drilling moratorium was enacted in May following the April BP spill and was lifted in October. The longer new permits remain in limbo, the more likely it is that the barrels lost estimate will rise.

But despite stagnant new drilling activity, oil production in the Gulf, estimated at around 2.5 million barrels per day, has not been affected.

In total, the country produces about 8 million barrels of oil a day, and uses about 20 million.