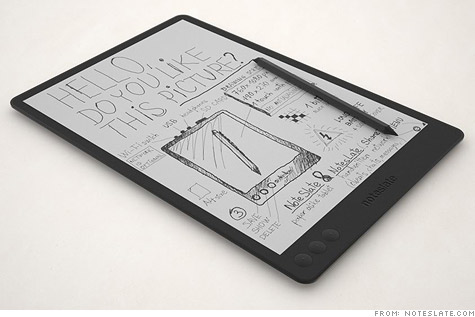 NoteSlate's promise of a $99 digital tablet captured imaginations across the Internet. By Jessica Bruder, Innovation Nation editorFebruary 25, 2011: 10:36 AM ET

NEW YORK (CNNMoney) -- There is no working prototype. No video. No proof that it exists.

Yet NoteSlate -- a digital drawing pad, or at least the idea of one -- is burning a hole in the blogosphere. A few weeks ago, descriptions and mockups appeared online at NoteSlate.com. Since then, hundreds of technology news and gossip sites around the globe have written about it in at least half a dozen languages, heralding the imminent arrival of a $99 e-ink digital tablet that mimics the simplicity of old-fashioned pen and paper.

NoteSlate's homepage opens with a question, handwritten in sloppy capital letters on a graphical rendering of the tablet: "Hello? Do you like this picture?" The answer, it seems, is a resounding "yes."

The company, which promises to deliver the device in June, has 4,600 followers on Twitter. More than 44,000 Facebook users shared a link to NoteSlate by clicking a "like" button on the company's website, which trumpets an array of features.

For starters, there's a 13-inch (bigger than an iPad!) e-ink display, which responds to the touch of a stylus. There's also a built-in MP3 player, a WiFi module, a mini-USB port and an SD card slot. Most impressive of all: The battery in this hypothetical half-pound device lasts up to 180 hours and can be charged by an optional solar case.

On NoteSlate's Facebook page, enthusiastic fans -- many begging to pre-order the non-existent device -- have weighed in from more than a dozen countries, including China, France, Egypt, Brazil, and Vietnam. The sentiment was best summed up by Jared Bird, a student at Northeastern University. He posted: "I WANT ONE OF THESE NOW!!!"

But as interest in NoteSlate grows, so does a sense of unease. NoteSlate's website, littered with broken links and enough language glitches to give a copy editor cardiac arrest, has done little to inspire confidence.

An excerpt: "Maybe you would like to welcome something straight, less network connected, rural, almost natural, looking as a paper, physical, although very very useful." In another section, the site talks about "bandwitch" for sending files.

A German Facebook user posted a picture on NoteSlate's profile to illustrate the growing skepticism. Captioned "I Want to Believe" -- an "X-Files" riff -- it works in a visual wink to 2009's infamous "balloon boy" caper.

Fans want to know: Is NoteSlate a hoax (see: MeatWater, Hotelicopter)? And if so, why would anyone bother making this up?

CNNMoney tracked down the man behind the project: Martin Hasek, 28, a Czech product and furniture designer.

He declined to name specific investors and suppliers for the project. Asked why he launched NoteSlate.com without a prototype or a product video to share, he e-mailed, "We launched NoteSlate for just one reason. We were not sure if NoteSlate could be successful on the market, because of its absolute different concept from the other tablets out there. What we got now is what we really needed to move forward and to make this tablet really real and changing the world."

So what does Hasek have now? Lots of attention.

NoteSlate is best described as buzzware: a tech concept masquerading as a full-fledged idea because it needs consumer enthusiasm to support its development. Thanks to the marvels of the Internet, it's easy to foist an unfinished idea on the world, creating a crowd-sourced trial balloon that, if it succeeds, might attract capital and talent.

Rolling out buzzware doesn't require programming expertise or piles of money. The ingredients are simple: an idea, some marketing savvy and a domain name.

The fans arrived in droves. NoteSlate has attracted interest from a legitimate tech developer: Jablotron, a Czech electronics manufacturer that focuses primarily on security systems, home automation and communications. (Internationally, the company is best-known for creating a colossal cell phone for the elderly.)

NoteSlate "is using our consultancy and some guidance," Dedek wrote. "I think, that if they do not lose their drive, there is a real chance that the product will launch the market soon."

So will NoteSlate become more than a nifty idea?

That choice may be in the consumer's hands. Enthusiasm is a powerful motivator. Buzzware, after all, relies on a simple adage: If you come, they will build it.