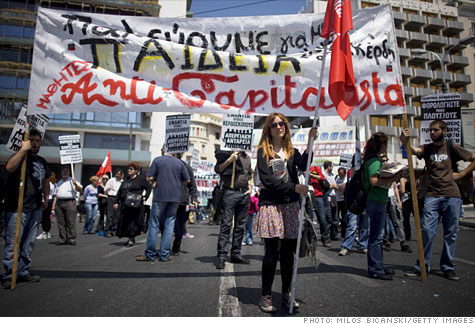 ATHENS -- In Greek mythology, the god Cronus devoured five of his offspring to prevent them from overpowering him. Only Zeus, with his mother Rhea's help, escaped the fate of his siblings. Greece's youth, hit hard by the after effects of the debt crisis, may be feeling a bit like one of Cronus's unlucky children these days-as if they are about to be swallowed whole by an economic situation that is leaving many of them feeling hopeless about what the future holds.

The situation for many under the age of 35 in this country of 11 million is close to desperate. Unemployment for those between the ages of 15 and 24 rang in at an alarming 35.6% at the end of November, the latest statistics available. Youth unemployment, of course, is widely considered one of the drivers to the current unrest in the Middle East, It's also a global problem, according to the International Labor Organization, which called the growing number of the world's unemployed young people, "a lost generation" in a recently released report.

In Spain alone, the youth unemployment rate is over 40%. But in Greece, the issue resonates within the broader context of the debt crisis that has plagued the country since December of 2009. And if you add in the unemployment rate for those between 25 and 34 -- 17.9% -- it becomes clear that Greeks under the age of 35 are bearing a disproportionate part of the burden stemming from the country's financial difficulties.

"It's one of the most serious problems facing this country," says respected columnist and journalist Stavros Lygeros of Kathimerini, the largest daily newspaper in Greece.

Even those with undergraduate and graduate degrees are not immune-many end up without jobs or with low paying ones that have nothing to do with their studies just to make ends meet. Take Lygeros's daughter, Nefeli, 27. The Columbia University and Goldsmith University graduate holds not one, but two, master's degrees in media and film studies. She's sent out 30 some resumes since she returned to Greece last year, but has come up dry, save an offer or two to take on non-paying internships. She's considering moving back to London, where she earned one of her degrees.

"I'm extremely sad and frustrated. I love my country, my family, my friends, my life is here," she says. "You spend all this money and make all this effort and you come back and you hear, 'You know what, there's nothing for you here.' And then they show you the door.' It's unfair. I feel like I have to choose between my personal life and my career."

Ioannis Feloukas, 34, a graduate of the London School of Economics with a Masters in Business Administration, can relate. He's sent out 787 resumes in Greece and 50 abroad. "I know exactly how many," he bemoans. "I've kept count." This is a man with eight years of experience too, in both the public sector, as a hospital administrator, and in the private sector, as a financial analyst.

Married and with a child on the way, he takes what he can get-odd jobs here and there, gathering statistics for various marketing and pharmaceutical companies to collect a mere 10 to 25 euros for each questionnaire he gets someone to fill out.

He isn't the only young Greek to feel that way. According to a recent survey published by To Vima, a left-of-center newspaper, four out of 10 Greek college graduates from the ages of 22 to 35 are actively seeking jobs abroad. And another study by the University of Macedonia found that nearly 85% of those who are in colleges abroad are opting to stay there.

Theo Nikolaou, 24, is one of them. He just completed a master's degree in international relations at the University of Warwick in the United Kingdom. He's not coming back, at least for now. Instead, he's accepted an internship at the BBC World Service in London. "My chances of getting a job relevant to what I want to do in Greece are pretty slim," he says. "For me, I think, I'll be heading home only for holidays."

Cynthia Spanou, 25, a Fulbright scholar pursuing a master's degree in electrical engineering at Columbia University does not expect to return any time soon either. "All my friends and relatives say, 'Don't come back. You won't find a job.'"

Little wonder so many young people in Greece seem to be walking around in a daze. "They seem to have no purpose or hope. They're lost," says adjunct professor of sociology Georgia Lagoumitzi of the students she sees wandering around the campus of the American College of Greece in the northern Athenian suburb of Aghia Paraskevi. "A generation is defined by its social consciousness and how it is impacted by a social event. This one will be defined by the economic crisis. It's a lost generation."

The socialist government of Prime Minister George Papandreou is aware of the problem, but believes Greece's brain drain has roots that go way beyond the current economic crisis. Though the other countries with employment problems mentioned earlier all have different root causes, their examples bear out how tricky it can be to keep a workforce aligned with a country's economic needs.

Education minister Anna Diamontopoulos points out that Greece's labor force is out of balance-with more university graduates than there are positions. "We have 30,000 more doctors than are necessary," for example, she says, adding that the government is about to begin a campaign to encourage more high school students to pursue vocational careers. "There is a demand for technical jobs, but we don't have the people. What we need is a shift in the way we approach the workplace."

Tell that to Konstantia Saksani, 24, a graduate of the Panteion University of Social and Political Sciences. Instead of pursuing her chosen career as a journalist, she sells clothes at a trendy shop in Athens for 900 euros a month and still lives with her parents. "My generation has to be the unluckiest. We started looking for work just as the crisis began," she says. "We don't have many options. We either go abroad, forget what we've studied, or go hungry." That and try to stay out of Cronus's way.

Will office superstores be the next retailers to fall?