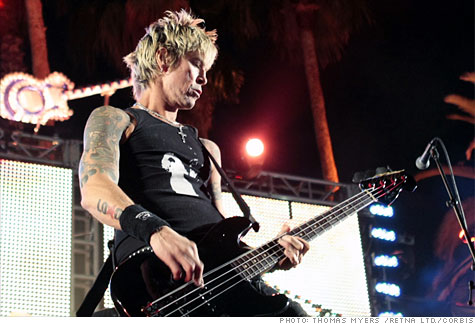 Duff McKagan wants to help other rock stars with their portfolios. By Mina Kimes, writerFirst Published: March 4, 2011: 11:35 AM ET

The former Guns N' Roses bass player says years of drug and alcohol abuse caused the rupture, which left him sidelined for months. As he recovered from the incident at home and sobered up, he found himself with hours of free time and little to do. McKagan wandered into his basement one day and came across a file cabinet containing GnR's financials from the previous six years. While thumbing through the reports, he realized he had no idea what they meant. Then, he panicked.

"I couldn't make sense of it. I didn't know how much we had made or lost on the tour," McKagan recalls. "As a 30 year-old millionaire, how do I admit to somebody that I don't know what the fuck I'm doing?"

Now, 17 years later, McKagan is starting his own wealth management firm for musicians. The company, called Meridian Rock, will be headed by McKagan and Andy Bottomley, a British investor. Their goal is to educate rockers about their finances instead of pandering or lying to them -- no small feat in the music world, where businessmen, a.k.a. "suits," are often seen as the enemy.

McKagan, 47, says his epiphany in 1994 was a wakeup call. He enrolled in a basic finance course at Santa Monica Community College, which he says gave him a hunger for academia. McKagan moved to Seattle four years later and signed up for more classes at a local community college.

"It took me twice as long as an 18- or 19-year old just out of high school to do the homework, but I got through it," he says. By the time he was accepted into in Seattle University's Albers School of Business, McKagan had become actively involved in managing his portfolio, which included everything from stocks and mutual funds to property.

A few months into his last year of business school, McKagan, who had left Guns N' Roses in the late 90's, formed a new rock supergroup, called Velvet Revolver. The band -- which also included GnR's Slash and Scott Weiland, the singer from the Stone Temple Pilots -- was a surprise hit. Velvet Revolver's album debuted at No. 1, and McKagan took a hiatus from business school to go on tour (he is still one semester short of graduating). When Velvet Revolver broke up a few years later, he played a short stint with the band Jane's Addiction, and then fronted his own outfit, Duff McKagan's Loaded.

It was around that time, McKagan says, that word started spreading that he knew something about managing money. He began getting regular calls from musician friends with questions about everything from whether to buy a house to where they should invest their money.

Though McKagan has spoken publicly about the business of music and authored a column in Playboy on finance ("Duffonomics"), he is quick to downplay his investing expertise.

"I'm not a financial planner -- I was just trying to figure this out for myself," he says. "I didn't want to be 60 years old and broke, having made all this money in my twenties...that was my simple goal."

Becoming a suit, without the suit

But the mere fact that his friends were looking for advice from a guy with just a few years of schooling under his belt led him to have another epiphany. Most rock stars know nothing about their finances. Some don't want to know -- but others are kept in the dark, or are too self-conscious to ask simple questions. And yet, they were comfortable talking about money matters with McKagan, who was one of their own -- so what if he could bridge the gap between the musicians and the suits?

About a year and a half ago, McKagan met Andy Bottomley, a former banker who says his early stage venture firm, Imprimatur Capital, counts investors like Paul Tudor Jones' Tudor Investment Corp. Bottomley is a music aficionado (he counts indie acts Sonic Youth and Sebadoh among his favorites) and the two hit it off immediately, so much so that they decided to form Meridian Rock together. Though the company is still in its early stages -- McKagan and Bottomley are currently interviewing money managers in both Europe and the U.S. -- it has won industry backers like Peter Asher, the former A&R man for the Beatles' Apple Records and producer of several James Taylor records.

There are already scores of wealth managers, both at small boutique firms and large bulge bracket banks, who cater to high net worth individuals like musicians. What makes Meridian Rock different, McKagan says, is its understanding of the industry.

For example, he says, most bankers overestimate the "window" in which music acts are guaranteed income, which he places at three to five years. The musicians themselves are equally clueless, he adds. "You think the money is going to keep coming," he says. "When you get that big contract, or your record goes platinum and you're selling out concerts, you don't see that it's going to end."

Anyone who's ever seen Behind the Music or Cribs knows that rock stars aren't generally frugal creatures. But they are rarely told, in blunt terms, when they need to cut back, which is one reason why so many go into debt.

"A lot of business managers and attorneys are nurturing that, saying, 'You're the greatest, this is never going to end, the next album is going to be greater,'" says Rick Canny, who manages McKagan's band. "A manager's responsibility is not to tell you, 'In a couple years, you're done.' That's the best way to lose a client."

Musicians tend to surround themselves with intermediaries who make their financial decisions for them. McKagan says Meridian Rock's advisors will talk directly to the talent, in plain and simple terms. The company's three tenets, he notes, are righteousness (i.e., not screwing people over), transparency, and education.

While he admits that not all rockers will be interested in the service, he believes that many want to learn more about finance, but are afraid to admit how little they understand.

"If they're anything like me when I was thirty, they're too embarrassed to ask," he says. "I didn't know what a stock was, what a bond was." Today, McKagan knows a great deal -- and he has an appetite for instruction.

Buffett, Simpson and a mountain of Berkshire investments