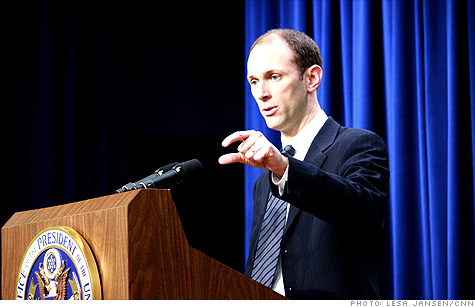 Austan Goolsbee, chairman of the Council of Economic Advisers, said that stronger economic growth, including an emphasis on doubling exports, is the best way to address the deficit.

"Let us not continue saying that the problem is runaway discretionary spending, because that's 12% of the budget," said Goolsbee. "Growth is going to be a key component of getting the deficit down."

The remarks come as Democrats and Republicans in Congress debate spending cuts as part of a long-term debt-reduction plan. A recent survey the National Association of Business Economics, the group Goolsbee was speaking to, found most members believe the federal deficit is the most serious long-term economic threat to the U.S. economy.

Goolsbee blames the widening deficit on the plunge in tax revenue caused by the recession, not by a huge increase in spending. He said Congress needs to be careful not to make bad cuts that will undermine economic growth in the future.

"There are two ways to mortgage the future: one is by running up deficits and leaving the bills for our kids. The other is not investing in the things our children will need to have productive careers and good paying salaries in the future, such as education, investing in research and development," he said.

He suggested many of the cuts being proposed in the current budget debate would add to federal deficits in the long run.

"There are such things as bad cuts to make," he said. "If you're going to pull away the financial aid of 9 million college students in the middle of the school year so that many have to drop out, that is not a good idea. That doesn't pay for itself. That's a cut that costs you money."

He said the Obama administration is willing to work with Republicans on fixing budget gaps in Medicaid, Medicare and Social Security, but it has to be done in a bipartisan manner.

"We've got to live within our means," he said. "We have to cut, we have to think about entitlements. But that is an issue we've known about for 30 years and that can not be done in a partisan way."

Despite the recent signs of improvement in the economy, Goolsbee said the administration is still concerned about headwinds like the weak housing market and the recent run-up in oil prices.

He repeated earlier comments from White House Chief of Staff William Daley that the administration is at least considering tapping the nation's Strategic Petroleum Reserve as a way of addressing the run-up in oil prices, but gave no new details about what would prompt that decision.

"The SPR exists to deal with large international supply disruptions. That's why we created it," he said. "That is an option we have."

Budget battle: Neither side blinks