Where in the world is cheap labor? 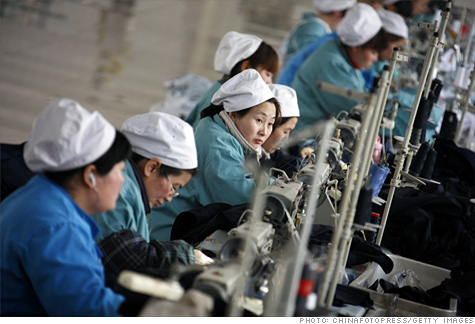 FORTUNE -- Auret van Heerden is a former anti-apartheid activist who was tortured, imprisoned and ultimately exiled by the South African government. He's now CEO of the Fair Labor Association (FLA), with offices in Washington, Geneva and Shanghai.

The FLA brings together multinational companies like Nike (NKE, Fortune 500), Adidas and Hanes (HBI); universities like Princeton and Notre Dame; and NGOs like the National Consumers League and Human Rights First to end sweat-shop working conditions in factories around the world. I spoke to van Heerden last week, shortly after he returned from a trip to China, where the inflation rate has reached nearly 5%, food inflation is more than 10%, and double-digit increases in the minimum wage are suddenly the norm.

Is China still an option for global manufacturers seeking lower costs of production?

It's an incredibly fast-moving situation. Labor markets which we previously thought were inexhaustible, like China and India, have actually tightened up quite dramatically. Employers can't get workers. Wages have gone up. Add to that the energy cost increases, and the factories, the contract manufacturers, are now suddenly squeezed. So they're turning around to their buyers -- to the retailers or the brands -- and they're saying, "Hey, my prices need to go up." And the brands are saying, "Whoa! We don't think we can pass those prices on to the consumer." There's something of a train smash looming.

They're wondering if they could push more stuff to Bangladesh or Vietnam or Indonesia and so on, but the options are limited. The last country added to the supply chain was Cambodia in 2000, and there are only one or two places left. People are looking at Africa again to see if there isn't something that they've overlooked there. Finding another cheap platform, another cheap country, was the default until now, but frankly that's no longer an option. There's nowhere else to go.

So will US consumers have to pay more for sweaters and jeans at the Gap (GPS, Fortune 500)?

Yes. I think consumers will see across the board price increases for apparel. Probably for electronics and other popular consumer goods, as well, because their cost structures are shifting, too. The end of cheap labor is not the only factor. We're also running out of cheap water and cheap land. China doesn't have enough water for domestic consumption. Yet silicon-chip factories use billions of gallons. Chinese authorities have already told Beijing that the cost of water will increase fourfold next year. Industry will have to pay more for workers, more for raw materials, more for water, and more for energy. There's just no running away from all of that.

At what point do these shifting trends begin to benefit workers in the United States and other developed countries?

I put this question to a bunch of heavy industrial companies in China, and they said quite soon, actually. In fact, we're reaching that point already. I noticed an article a couple of weeks ago about Master Lock, the iconic lock company, headquartered in Milwaukee. They re-ran the numbers, and they've actually moved production back to the US from China. The CEO pointed out that fortunately they've never forgotten how to make locks. They've always kept a small production footprint in the US. A lot of other companies, when they outsourced, they closed their last factories and gave all the work to contract manufacturers. Those guys may find themselves stuck now.

Will this be a disaster for developing countries that have come to rely on exports for jobs and economic growth?

I've never thought that jobs were a zero-sum game. But a lot of the jobs are in places right now that are not really sustainable. It would be tragic if those jobs simply left again and went to the next cheapest place -- and that cheapest place might be the US. I would rather see the companies stay and invest in training, invest in new technology, and become more efficient. Right now in China and in Bangladesh, just to cite two countries, the electricity supply is inadequate for one reason or another. And so factories are using diesel generators to make up the deficit -- which is expensive, inefficient, and very bad for their carbon footprints.

You've been at this for years. I don't know if you let yourself get optimistic or pessimistic, but what's your state of mind right now?

I see things getting worse. The ability of governments to regulate key areas of labor markets or the environment is generally declining. There are a lot of reasons for that, not only corruption. It's a bankruptcy of the political processes in many countries. That creates a lot of risk for everybody concerned -- for the buyers, for the employer, for the workers, and for the environment.

Take human trafficking, for example. We have this really globalized labor market now, and as the local economies disintegrate, more and more young people are having to go and look for work elsewhere. But they're often falling into the hands of unscrupulous labor brokers. Human trafficking is now the second-biggest criminal activity after arms dealing. It's more valuable than drugs. Companies don't have a good handle on this right now. I see it as the next big issue that socially responsible companies are going to have to deal with -- the amount of trafficked workers in their supply chains.

How does that change?

Basically we'll have to get it done ourselves. Civil society and socially responsible business has to pick up the baton. You asked about my state of mind? I'm depressed by the actual conditions on the ground. But I'm optimistic because we have been able to mobilize civil society, and socially responsible companies have responded. If we can get a critical mass, and the right partnerships of civil society and multinationals, I think we can fill a lot of these gaps.

It's not uncomplicated and it's not un-controversial. A lot of people would say, "This is the role of government. Nobody elected these multinationals. Nobody gave them a mandate." But frankly if you're waiting for government to come along and clean up your water supply or to protect your wages and your rights at work, I'd say don't hold your breath.