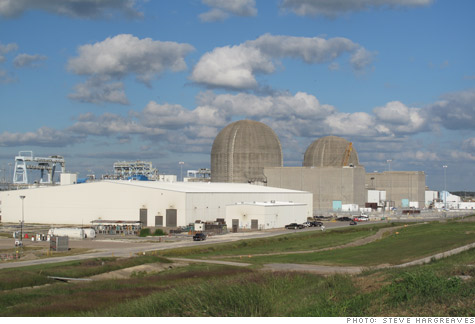 High levels of uncertainty in the aftermath of Japan's nuclear disasters have led the company to limit work on the project to the licensing and securing of federal loan guarantees, Crane said.

No new nuclear plant has won final approval in the United States since the Three Mile Island accident in 1979, although site work is being done at a couple of locations around the country.

Eighty miles southeast of Houston, NRG (NRG, Fortune 500) wants to expand its nuclear facility from two reactors to four -- in part with financing from Tokyo Electric Power Company, the owner of the Fukushima Daiichi plant that was heavily damaged in Japan's earthquake and tsunami.

Tepco holds a 10% stake in the NRG expansion project, with the option to purchase an additional 10% share. A spokesman for NRG confirmed the company has been in touch with Tepco following Japan's twin natural disasters -- but only to offer assistance.

Complicating matters is the industry-wide regulatory review instituted by the Nuclear Regulatory Commission in the wake of the Fukushima Daiichi disaster.

"The timing of this from where our project stands could not be more unfortunate," Crane said. "And time can be the biggest enemy for a project like this."

It's unclear how long the review will take.

"We actually agree that we need the review," Crane said. "But the question is what are we looking at? A three month review or longer?"

Crane said he hopes his plant will be among the first to be given the green light by regulators. He stressed that the proposed reactors will sit 10 miles from the Gulf Coast, in a non-seismic area.

How close is your home to a nuclear plant?

But even seemingly small changes in regulations could kill the project. For instance, NRG's plan calls for the new reactors to be spaced much further apart than those at Fukushima Daiichi plant. But if regulators demand additional space, it could derail the project, Crane said.

In another blow to the planned expansion, San Antonio power company CPS Energy -- which already holds a 7.62% stake in the planned reactors -- announced it was indefinitely suspending all discussions about purchasing more power from the plant. However, CPS did not rule out future discussions.

"That was going to be the critical task ahead of us in the second and third quarters," he said, but added that the more immediate concern is getting approval from regulators to build.

For South Texas, there are jobs at stake. (Read what Bay City residents want.)

Less than 20 miles from the NRG plant lies the town of Bay City, where many people work at the power plant and hope an expansion would bring more jobs. The plant itself already employs 1,200 people.