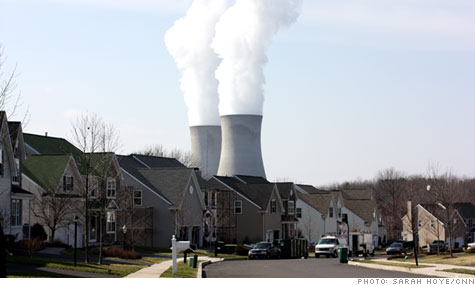 The industry is only responsible for the first $12 billion in damages, and private insurance does not cover nuclear accidents. By Steve Hargreaves, senior writerMarch 25, 2011: 6:00 AM ET

NEW YORK (CNNMoney) -- Aside from the human toll a worst-case scenario nuclear reactor meltdown would cause, American taxpayers could also be stuck paying hundreds of billions in damages. But the industry would only be on the hook for a tiny fraction of that -- even if it was to blame.

Under current law, the utilities that operate nuclear power plants are responsible for a fund that pays the first $12.6 billion in damages and lawsuits resulting from any incident.

"This thing is obviously not going to cover the costs of any major accident," said a spokesman for Massachusetts Democrat Rep. Ed Markey, who has long served on the House committee overseeing nuclear power, referring to the $12.6 billion fund. "That means the U.S. taxpayer will be left on the hook for the rest of it."

A 1982 study from Sandia National Laboratories, commissioned for the Nuclear Regulatory Commission, said the consequences of a nuclear meltdown would be catastrophic. The disaster could cause 50,000 fatalities and $314 billion in property damage.

The government gave the nuclear industry the liability cap in 1957 to entice the private sector into building nuclear power plants. The original cap was even smaller than the $12.6 billion -- it has been adjusted upward to account for inflation.

Building nuclear plants was effort to boost homegrown energy and showcase the peaceful uses of a technology that had previously only been used for war -- known as "Atoms for Peace." Without it, it's doubtful the private sector would have built nuclear power plants at all.

A worst case scenario would have bankrupted a company, said Winfred Colbert, an energy and environmental attorney at the Houston office of Vorys, Sater, Seymour and Pease. "They would not have gotten into it," Colbert said.

The act that created the cap, known as Price-Anderson, said that federal and state governments will step in and cover "bodily injury, sickness, disease or resulting death, property damage and loss as well as reasonable living expenses for individuals evacuated" in the event of a disaster, according to the NRC's Web site.

If you live within the fallout area of a nuclear power plant and can no longer return home, you'll have to get in line with everyone else for a government payout, which may or may not cover your needs.

Neither Colbert nor other experts could think of any other industry that enjoys such protection resulting from a failure of its product.

Putting a number on a hypothetical scenario such as a full nuclear meltdown in the United States obviously leaves much room for guesswork.

The NRC noted the age of the 1982 Sandia study, suggesting it's no longer accurate.

The agency is working on a new study, said NRC spokesman Scott Burnell, but that study focuses on health impacts, not property damage.

Still, while a property estimate could not be provided, Burnell said the new models show a release of radiation would be much smaller and happen more slowly, largely thanks to improved understanding of the containment structures and emergency responses at U.S. plants.

Smaller radiation releases "would be expected to have smaller economic effects," said Burnell.

The industry didn't address the $700 billion estimate directly, but said the $12.6 billion is adequate to cover any foreseen incident.

Colbert, the energy attorney, noted that in the only major disaster at a U.S. nuclear plant, the partial meltdown at Three Mile Island in 1979, the containment structure generally worked. Not much radiation is thought to have leaked into the atmosphere. The $70 million or so in evacuation, cleanup and other associated costs were easily paid for by the industry's $12.6 billion fund.

"They are generating 20% of the country's electricity," said Bryant Kinny, a spokesman for the Nuclear Energy Institute. "That's something we can't live without."

But with so many major U.S. cities so close to nuclear power plants -- New York, Boston, Chicago, Washington D.C. and Philadelphia are all with a 50-mile fallout zone -- it's hard to imagine a major disaster wouldn't result in damage far exceeding $12 billion.

A 60-mile radius around Chernobyl -- the site of the worst nuclear disaster in history -- is going to be off-limits for human occupation for hundreds of years. American cities may not need to be abandoned in the event of a metldown, said Frank von Hippel, a noted Princeton nuclear physicist and co-chair of the International Panel on Fissile Materials.

"It might be that people would be willing to live with higher radiation levels in exchange for not moving out," said von Hippel. "Also, more drastic decontamination efforts than we have assumed might be applied."

Still, he said the $720 billion Sandia estimate is "consistent with our calculations, especially if the wind blew toward New York."