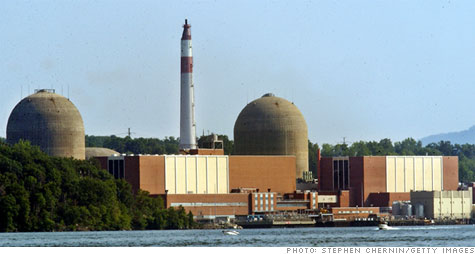 Calls to close Indian Point grow louder, but where will the power come from? Tour the plant By Steve Hargreaves, senior writerMarch 28, 2011: 5:45 PM ET

That translates into an extra $65 a year for the typical New York City resident, based on numbers provided by the utility.

"That's really cheap insurance to make sure we don't have a catastrophic release of radiation," said Marilyn Elie, who lives two miles from the plant and has been trying to get it closed for the last 17 years.

If Indian Point is shut, Con Edison would buy the lost electricity on the open market, most likely from the cheapest possible energy source. The utility said that would probably be a mix of electricity generated from coal and natural gas.

Calls to shut the power plant, located 25 miles north of the city, have grown louder in recent weeks as the crisis at Japan's quake-stricken Fukushima Daiichi facility continues.

Find the nuclear power plant closest to you

The operating licenses for Indian Point's two reactors expire in 2013 and 2015. The utility that owns the plant, New Orleans-based Entergy (ETR, Fortune 500), has applied to extend the licenses for another 20 years, but opponents of the plant are hoping the tragedy in Japan will highlight the dangers of nuclear power here in the United States.

New York Governor Andrew Cuomo, a longtime critic of the plant who has in the past called it "a catastrophe waiting to happen," has reiterated his position in recent days that it should be shut.

Cuomo is joined by other governors who want plants shut in their states, including the governor of Vermont.

Unlike New York state, which relies on the federal government's Nuclear Regulatory Commission and has no authority over relicensing, Vermont law gives the legislature a say in the decision.

The Vermont legislature recently voted to deny the license extension for its only nuke plant, Vermont Yankee, although the NRC approved it. The plant is the same design as the Fukushima Daiichi facility.

In New York, the chief concern at Indian Point is that it's an aging plant located so close to a major population center -- some 20 million people live within the plant's 50-mile fallout zone. Critics say evacuation would be impossible, and that its proximity to all those people makes it an inviting target for terrorists.

The plant is also built on an active fault line. Entergy, which bought the plant from Con Edison (ED, Fortune 500) in 2001, says it can withstand an earthquake of 6.1 in magnitude, larger than that largest quake to ever hit the area. But a recent Columbia study says magnitude of 7.0 tremor is possible.

"Indian Point is now considered the most dangerous plant in the country when it comes to the risk of meltdown due to earthquake," the environmental group Riverkeeper wrote on its Web site. "It is our position that until Indian Point is proven safe, it should be closed."

He believes the plant could even withstand a 7.0 quake, which is about twenty three times more powerful than one of 6.1 magnitude, because it was built with so many redundancies in mind. (See correction)

Plus, it's got a containment system comprised of steel-reinforced concrete four to six feet thick, built on solid bedrock.

The emergency plans the plant has in place are effective, he said, adding that "the industry always plans for the worst-case scenario."

Where will the power come from?

If Indian Point is closed, the main question is where the power to replace it will come from.

The facility generates some 2,000 megawatts of electricity, most of which is sold into the New York City area. About 30% of the region's power comes from Indian Point.

In a letter advocating keeping the plant open, Con Edison said 1,400 megawatts of power would have to be replaced if Indian Point is shut.

Most of that power, the utility said, would come from building new natural-gas fired power plants or importing electricity produced by burning coal.

Both of those options come with their own environmental risks -- namely air and water pollution.

The utility also questioned whether new generating capacity would be built in time to avoid a power disruption if Indian Point was closed.

But there's nothing saying the new power must come from natural gas or coal.

Electricity from wind is another option.

Wind would be more expensive, although how much more is difficult to say.

Energy imported from existing coal-fired plants might be far cheaper than wind power.

But besides cost, there are other issues with wind -- it doesn't blow all the time and finding enough suitable sites to locate 1,400 megawatts worth of wind turbines may be difficult.

For Elie, the activist living near Indian Point, a solution can be found.

There are many companies producing electricity that would welcome the chance to sell 1,400 megawatts of power to Con Edison.

"It would be a business opportunity for the people who generate it," she said, pointing to the massive new offshore wind proposals backed by Google (GOOG, Fortune 500) and others. "The market will figure it out."