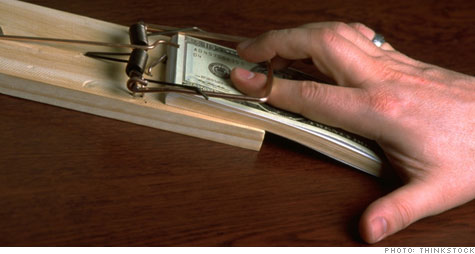 NEW YORK (CNNMoney) -- Watch out millionaires: The IRS is coming for you.

Especially if you make more than $10 million. Audits of these folks surged 73% last year, hitting more than 18% of taxpayers in the highest income bracket, according to recently released statistics from the IRS.

"There's always been this public perception that the rich are getting away with murder and the poor guy is left footing the bill," said Thomas Cooke, professor of accounting and business law at Georgetown University. "It's true that historically the low income earner was more likely to be subject to an examination than a high income earner, but now the higher income taxpayer is getting the greater focus."

Taxpayers making between $5 million and $10 million were also under more scrutiny last year. The IRS examined nearly 12% of the returns it received from people in this tax bracket -- a 54% jump from the previous year.

Regular millionaires were in the crosshairs as well. Audits of taxpayers with income over $1 million increased 15% last year.

The move to crack down on millionaires comes as the IRS looks to boost revenue and to improve its image among average taxpayers who think the IRS favors the wealthy, said Cooke.

Because rich taxpayers can often afford to spend more money on tax preparers and accountants, the perception has been that they can cheat the system more easily than the average Joe who is doing his taxes with a company like TurboTax or on his own.

And of course more audits of the wealthy mean more revenue for the tax agency; funds collected from auditing jumped 18% to $57.6 billion last year.

"The IRS is looking for additional sources of revenue, and the higher the income, the greater the potential reward when the IRS finds mistakes," Cooke said.

But a jump in audits doesn't necessarily mean that the IRS will hit the jackpot immediately. Many audits aren't resolved for several years, so the IRS will need to gauge how much money the new enforcement efforts bring in over the next few years. And the agency is only likely to continue ramping up audits of the wealthy if a significant amount of money is collected as a result.

"It's fine and dandy for the IRS to say this is how many audits we've given to the wealthy, but we'll have to get some more data on how much they collect, and the proof will be in the outcome," said Cooke. "I don't imagine in the short term that the IRS will back off the 18% examination rate for [taxpayers with income of] $10 million and more, but the question is whether it gets expanded beyond that."

And while millionaires were hit the hardest, the IRS boosted enforcement across the board last year. Overall, the IRS audited 1.58 million tax returns last year, or about 1.11% of all the returns it received.

So that means the chances of getting audited are still slim, but 8% higher than in 2009 and double what they were in 2001.