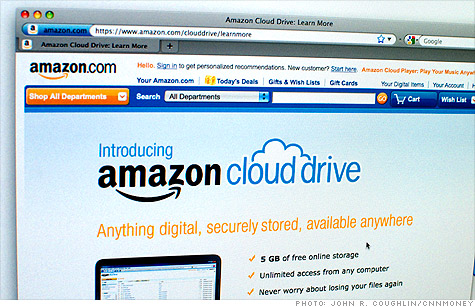 NEW YORK (CNNMoney) -- Amazon on Tuesday launched the Amazon Cloud Drive, an Internet service that lets customers store music and other digital files on the company's servers and access them on computers, smartphones and other devices.

Amazon (AMZN, Fortune 500) will give customers 5GB of Cloud Drive storage for free, and if users buy an MP3 album through Amazon, they'll be upgraded to 20GB of cloud storage for a year. The Cloud Player works on PCs, Macs and Android devices.

The move means Amazon is officially "to the cloud" with music -- beating Apple (AAPL, Fortune 500) and Google's (GOOG, Fortune 500) years-long attempts to do the same.

Analysts say that's because Apple and Google have been waiting for record labels to get on board with licensing agreements. Amazon decided to skip the niceties and simply take the plunge.

"For Amazon to try to sidestep all of this, the consequences are a big question mark," says Paul Verna, senior analyst at eMarketer. "It's the first shot across the bow, which is refreshing, but you can smell the lawsuits coming."

Indeed, a Sony Music spokeswoman said Tuesday that the company is "disappointed that the 'locker service' that Amazon is proposing is unlicensed by Sony Music. We're hoping that they will resolve the situation by moving to a licensed model. We are keeping our legal options open."

Cloud music services are "sort of a legal gray area," Verna says. "Music licensing rules are arcane, and [labels] don't yet know how to handle the cloud. Amazon has leapt to the front of the line, but this is not going to be a smooth ride."

Music streaming services like Spotify have grown rapidly in Europe thanks to simpler licensing rules -- but they can't crack the U.S. market.

The problem is that technology is evolving faster than business models. Major music companies have been slow to embrace streaming or subscription models because the monetization plan isn't clear-cut -- and they think they're not getting the appropriate value for each piece of content.

"Streaming music through the cloud doesn't conform to their traditional view of a product; this is something entirely different," Verna says. "And if Apple and Google are waiting for record labels to come on board, it might be an endless wait."

Indeed, the two companies have sat on their music-in-the-cloud acquisitions, while the labels drag their heels. Google snapped up iPhone streaming music app maker SimplifyMedia last year. Apple bought Lala in late 2009 and shut it down a few months later.

Amazon has another advantage in the race to the cloud: Indomitable infrastructure.

While Google and Apple are working quickly on the back-end technology to support music in the cloud, Amazon has spent years creating and refining an "elastic" model called EC2.

EC2 is designed to scale up automatically to handle giant traffic spikes -- the kind Amazon gets every year during the December e-commerce rush. The company has so much spare server capacity, in fact, that it enjoys a revenue stream hosting other websites, including the parts of The New York Times, Second Life, the Indianapolis 500 and the Washington Post.

"The EC2 service is the poster child for this kind of technology," says Chris Weber, managing partner at security outfit Casaba LLC. "There are competitors out there, but Amazon has a massive jump on it. Every new startup uses EC2 to get going."

Weber says Amazon's free 5GB of storage is a smart way to "rope people in. We have so many gadgets now, and it's solving a real problem. Once you're in the cloud, why would you want to move all your data around manually?"

If Amazon's Cloud Drive takes off, the company will be well positioned in the digital content space. It's made multiple media announcements in 2011 so far -- including its own Android Appstore and an instant movie and TV show streaming option for Prime users.

Verna, the eMarketer analyst, thinks Amazon is trying to put itself at the vanguard as media moves from physical to digital goods.

"Amazon positioned itself as the go-to place for deals on physical products," he says. "They need to continue to be a one-stop shop for books, movies and TV -- and as those products become digital, Amazon will have to evolve along with them."