Is that a pop I hear? Online stocks too pricey 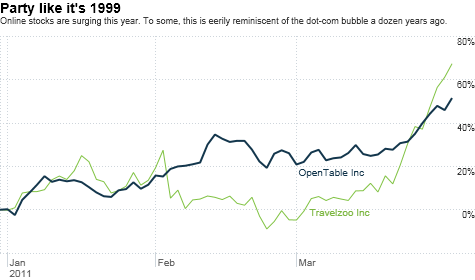 NEW YORK (CNNMoney) -- Hardly a day goes by without new estimates of what popular privately held online companies may be worth.

Facebook at $75 billion? Groupon with a value of $25 billion? Nearly $10 billion apiece for Zynga and Twitter? It's tough to not look at these "guess-timates" and proclaim that there is a huge bubble in the making in the social startup arena.

But for now, the only people that are really being affected (and therefore could get burned) by these insane valuations are the venture capital outfits plowing money into these companies, the top execs and founders of these tech firms and the few selling shares on private exchanges like SecondMarket.

However, it's starting to look like there may be too much froth in the public markets as well. That could be bad news for average investors chasing some of the hottest Web stocks.

I'm not talking about the giants of the Internet. Google (GOOG, Fortune 500) and eBay (EBAY, Fortune 500), for example, each trade at about 16 times 2011 earnings estimates. That's reasonable.

Even Yahoo (YHOO, Fortune 500), which has been searching for a real strategy for nearly a decade now, doesn't look too expensive at 22 times profit forecasts -- especially if you consider that Yahoo has some lucrative Asian assets it could unload for cash.

But some of the secondary and tertiary players in the online world are looking more than a tad rich.

Online reservation firm OpenTable (OPEN) is a nice little company with an interesting business model. It makes most of its money though monthly subscriptions it charges restaurants and fees charged per diner for reservations.

But should it really be trading at about $105 a share, or more than 90 times 2011 earnings estimates?

Internet travel newsletter Travelzoo (TZOO) is trading at about 56 times profit projections for this year. Really?

Even some larger and more well-known dot-coms appear to be priced for perfection. Amazon.com (AMZN, Fortune 500) and Netflix (NFLX) are each trading at about 55 times earnings forecasts for this year.

What's more, investors aren't suffering from sticker shock due to the triple-digit prices for each company. One Amazon share costs about $180 while a share of Netflix fetches nearly $240.

Priceline.com (PCLN), even at its lofty price of nearly $500 a share, probably has the most sane market value of all the hot online stocks. It trades at a mere 26 times 2011 earnings estimates. But it now has a market value of $24.5 billion.

To put that in perspective, Priceline is worth more than top airline Southwest (LUV, Fortune 500) and mammoth hotel chain Marriott (MAR, Fortune 500) -- combined.

Investors' exuberance (irrational or rational) isn't limited to the United States either.

Now don't get me wrong. The big difference between Web stocks today and dot-coms a dozen years ago is that most of the public companies now are legitimate businesses. I may think OpenTable is overvalued. But I don't think it's a silly idea doomed for failure like say, Pets.com

Still, just because companies like OpenTable and Netflix are profitable and not trading at 300 times earnings doesn't mean that they're bargains. They're just merely less bubbly than their late 90s counterparts.

Piazza said he is not predicting a massive shakeout like what happened to tech in 2000. But he thinks that as the U.S. economy improves, investors may begin to flock more toward steady blue chips that have lagged and away from hot momentum stocks.

But Eric Jackson, managing member at Naples, Fla.-based hedge fund Ironfire Capital, takes issue with the notion that dot-coms are now too pricey.

He conceded that investors have to be careful. For one, he said that investors trying to trade any of the Internet stocks riding the momentum train could get burned if they expect quick gains. He thinks many of the stocks are due to pull back in the short-term.

But he argues that if investors take a longer-term approach, some of the valuations are more compelling -- particularly when it comes to China.

Jackson owns Sina (SINA), which is the parent of Weibo, a Twitter-like service in China. Still, he said that not all China Internet stocks should be treated equally.

He said he's shorting Youku (YOKU), an online video company that went public last December and has more than quadrupled from its offering price -- despite the fact that it's not expected to make a profit this year or in 2012.

It just goes to show that some things really haven't changed since 1999. The dot-com sector, like any other, has its winners and losers. Investors have to do their homework to find the former and steer clear of the latter.

Silicon Valley hiring perks, are we in a tech bubble?