Turning up the heat for broad debt fix 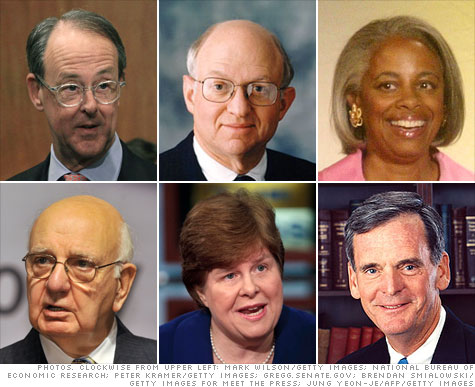 NEW YORK (CNNMoney) -- As lawmakers and the White House squabbled over the 2011 budget, dozens of prominent economists, former government officials and business leaders pressed them on Thursday to get serious about forging a long-term fix for the country's unsustainable debt.

A bipartisan group of more than 64 budget experts called for broad-based efforts to rein in the country's debt.

"We all agree that failure to act would be the worst policy of all," Maya MacGuineas, president of the Committee for a Responsible Federal Budget, said in a statement.

The group expressed its support for a letter sent two weeks ago by 64 senators calling on both parties and the administration to negotiate ways to rein in the country's debt and urging Obama to take a leading role.

The fiscal experts who spoke out on Thursday are also supporting the Senate's so-called Gang of Six, which includes three Democrats and three Republicans. They are working to convert proposals put out last year by the president's debt commission into legislation.

The Senate group has encountered some stiff resistance.

The budget experts' open letter on Thursday comes a day after the Blue Dogs, a group of 25 fiscally conservative House Democrats, put out its benchmarks for debt reduction.

The Blue Dogs' targets largely follow what would be accomplished by the president's debt commission proposals -- such as cutting deficits by $4 trillion over 10 years and achieving that reduction through two-thirds spending cuts and one-third revenue increases.

Last week, meanwhile, 10 ex-chairs of the president's Council of Economic Advisers recommended that Congress use the debt commission plan as a starting point in negotiations.

"There are many issues on which we don't agree," the former CEA chairs wrote in a Politico op-ed. "Yet we find ourselves in remarkable unanimity about the long-run federal budget deficit: It is a severe threat that calls for serious and prompt attention."

Separately on Thursday, a newly formed coalition of business and education groups called for "meaningful bipartisan action" on the national debt. The group includes the Business Roundtable, the Council on Competitiveness, the Association of American Universities and the Association of Public and Land-grant Universities.

Like the Bowles-Simpson commission, the coalition said that everything should be on the table -- including tax and entitlement reform.

"Americans must set priorities and share in the sacrifice required to put our fiscal house in order," the coalition's statement said. "We urge the president and Congress to emphasize bipartisan compromise rather than contention."

Where the Tea Party is wrong