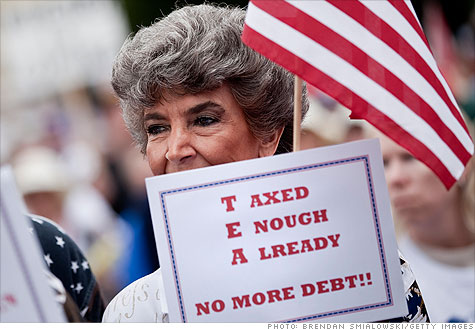 NEW YORK (CNNMoney) -- First, let's give the Tea Party props for thinking critically about how much money the government should spend -- energizing the debate about the national debt.

Now for the fact check: Some of the Tea Party arguments for how to address deficits are just plain misguided.

Walsh went on to say that the $100 billion in spending cuts that many in the House GOP wanted to make over the next seven months "is what tackling the deficit looks like."

For starters, the cuts proposed by the House GOP primarily hit non-defense discretionary programs, which make up less than 15% of the total budget

Budget experts on the left and right say successful debt reduction can only occur when spending is cut across all areas of the budget.

And excluding revenue increases from the mix is the equivalent of one hand clapping: ineffective given the size of the country's debt.

Reagan raised more revenue not by raising tax rates but by making it harder to evade taxes and by reducing the number of tax breaks on the books.

2. We can't move fast enough: For Tea Partiers there's no time like the present to cut spending in the name of fiscal responsibility. But they are coming up against a tough reality.

There is "an unrealistic expectation of how quickly things can change," said Robert Bixby, executive director of the Concord Coalition, a deficit watchdog group. "Some spending can't be shut off that fast, like a faucet."

That's because some spending cuts could affect benefits that people have come to rely on and changes might need to be phased in slowly to give them time to adjust.

3. Never compromise: The Tea Party freshmen succeeded in pushing House GOP leaders to propose deeper cuts for this year than they originally planned. And that pushed the Senate Democrats to agree to make some cuts, but they've rejected the magnitude of cuts in the House GOP bill.

"I don't think compromise right now is the option," Rep. Scott DesJarlais, a GOP freshman from Tennessee, said last week. "What we're asking is not unreasonable. People sent us here. There was a referendum. We were sent here to cut spending."

Walsh from Illinois put it more bluntly to Time magazine: "I came here ready to go to war. ... The people didn't send me here to compromise."

Standing one's ground is one thing. Not being willing to negotiate can create a potentially destructive stalemate that perversely could end up worsening the country's fiscal situation. That's because it can divert energy from more important fiscal matters and possibly create bad blood that will make the much bigger debate over long-term debt reduction that much harder to have.

"I am not in favor of raising the debt ceiling. In the last 10 years we have raised the debt ceiling 10 times. We are just giving the Congress a license to keep on spending," Minnesota Rep. Michele Bachmann said on NBC's "Meet the Press" on Sunday.

Raise the debt ceiling - or cut $738 billion this year

To the contrary, the need to raise the ceiling reflects previous commitments Congress made to borrow more in the future -- such as the $858 billion tax cut compromise passed in December.

If the ceiling is not raised, that can introduce a host of destabilizing factors that again could make the fiscal situation worse, not better. Among the potential fallout is higher interest rates, which hurt consumers. And if the United States ever defaulted on what it owed, that could rock world markets.

And all that assumes Congress doesn't commit to any new spending. It just reflects what the country would need to do to meet the old spending commitments on the books.