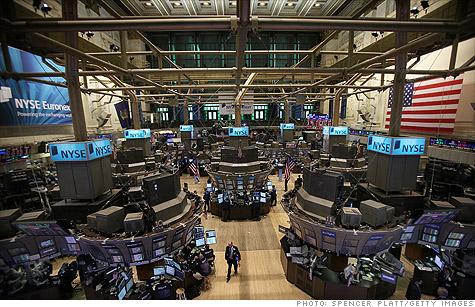 The floor of the New York Stock Exchange. Nasdaq OMX and IntercontinentalExchange are offering $11.3 billion for NYSE Euronext. By Ben Rooney, staff reporterApril 1, 2011: 11:27 AM ET

NYSE Euronext had agreed in February to be bought by the German exchange for $10 billion, in a deal that would create the world's largest exchange for stocks and derivatives.

Under the offer announced Friday, NYSE Euronext (NYX, Fortune 500) stockholders would receive a mix of cash and shares of Nasdaq (NDAQ) and ICE (ICE) common stock, amounting to $42.50 for each NYSE Euronext share.

The offer represents a 19% premium over the one made by Deutsche Boerse, according to a statement from Nasdaq and ICE.

NYSE Euronext confirmed in a statement that it had received the offer and is reviewing the terms. But the company urged shareholders not to take action based on the proposal.

Deutsche Borse acknowledged the rival offer in a brief statement, saying that the company's management continues to "strongly believe" that its deal is "the best possible combination for both shareholder groups and the stakeholders of the companies."

Under terms of the Nasdaq-ICE proposal, the two exchanges would spilt NYSE Euronext's businesses, with Atlanta-based ICE buying its derivatives business.

Nasdaq would take over the stock exchanges, including the New York Stock Exchange and markets in Europe. In addition, Nasdaq would acquire NYSE Euronext's U.S. options business.

The combination would create "a leading international exchange" with operations in sixteen countries and technology that is used in over 60 markets internationally, according to Nasdaq.

The new exchange would be based in New York; under the Deutsche Boerse proposal, a new Dutch holding company would be created with headquarters in New York and Frankfurt. ICE and Nasdaq would continue to operate as separate businesses if the deal is approved.

The development is part of what has been a wave of recent consolidation, as exchanges around the world look for ways to reduce transaction costs and increase exposure to the more lucrative derivatives, options and futures markets.

In the past three months alone, the London Stock Exchange announced a merger with Canada's TMX Group, the owner of the Toronto Stock Exchange; the two Russian exchanges -- MICEX and RTS - hooked up; and late last year, Singapore offered to buy out the Australian Securities Exchange for $7.8 billion.

"Our industry is undergoing a period of historic change," said Nasdaq's chief executive, Robert Greifeld, in a statement.

While the Deutsche Boerse merger is expected to face heavy scrutiny from both U.S. and European regulators, the rival suitors believe they will be able to "satisfy the required regulatory approvals in all jurisdictions."

Nasdaq said it expects the deal to result in "net synergies" that will save the company $540 million a year.

Greifeld said efficiency would come from consolidating trading platforms that could be operated on existing computers.

The focus on cost cutting and electronic trading has raised some concern about floor trading being phased out. But Greifeld stressed that there are no plans to eliminate the NYSE trading floor.

"Certainly we want the floor there," he said. "There should be no skepticism about that statement."

George Gero, chairman of the Commodities Floor Brokers and Traders Association, said he was encouraged by the proposal, though he added that it would face scrutiny from a host of U.S. regulatory agencies.

"I'm hoping they succeed," he said. "Because I would like to see the management of the New York Stock Exchange stay in New York."