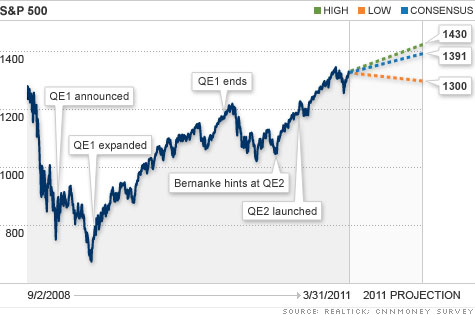 NEW YORK (CNNMoney) -- By the end of the second quarter, the Fed's QE2 program, which has helped fuel a six-month stock rally, will come to an end. But that won't stop the momentum.

All but one of the investment strategists and money managers surveyed by CNNMoney agree that the conclusion of the Fed's second round of quantitative easing will have a limited impact on the stock market.

"The economic recovery is much stronger than most give it credit for, and so much of the talk about the end of QE2 is factored in already," said Ryan Detrick, senior technical strategist at Schaeffer's Investment Research, whose forecasts puts the S&P 500 up another 6% by the end of the year.

Detrick added that although the Fed's bond buying program is coming to an end, the central bank will continue to support the recovery.

"[The Fed] has stated that they are going to do all they can to keep the economy moving," he said. "We still expect a strong second half of the year."

Why the Fed won't raise rates this year

And most experts agree. While there has been a lot of chatter about inflation and rate hikes, the majority of money managers and strategists think the central bank will hold off on raising rates until 2012. There are even a few who think a rate increase won't come until 2013.

CNNMoney survey: Where the markets are headed

Just last month, Pimco's Total Return Fund (PTTRX) slashed its bond holdings to zero, partly due to the uncertainty over who would fill the Fed's role as the biggest buyer of U.S. government debt.

"Who is going to step in and replace the Fed?" asked King, adding, "An even better question is at what yield will other buyers come to the table?"

Most experts expect investors to continue steering away from bonds, largely due to the uncertainty but also due to the yields, which some say are far too low to offer up enough value.

If investors continue to shun the market, yields on the benchmark 10-year note could top 4% by year-end.

There was one contrarian who said the end of QE2 poses a threat to more than just the Treasury market and that there could even be a case for QE3.

The housing and jobs market remain in "awful" shape, said Donald Selkin, chief market strategist at National Securities. The lack of improvement in addition to the end of free liquidity may worry investors, and in turn, take the sails out of the stock market.

"Stocks have been very dependent on this stimulus, and it should be noted that when QE1 ended in March of last year, the market took a major dive in the May and June until QE2 was announced at the end of August," said Donald Selkin, chief market strategist at National Securities.

With that potential volatility, Selkin thinks stocks will only gain another 3% by the end of the year.