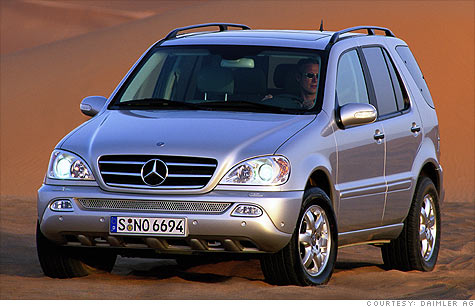 In some cases, the cruise control system in older M-class SUVs may not immediately shut off when the brakes are used. by Peter Valdes-Dapena, senior writerApril 7, 2011: 9:53 AM ET
Follow Peter on Twitter: @PeterDrives

Cruise control systems are supposed to immediately shut off the moment the driver uses the brake pedal.

Under some circumstances, particularly if the driver pumps the brakes, the cruise control system can require an excessive amount of brake force before it will shut off, according to a letter Mercedes-Benz sent to the National Highway Traffic Safety Administration on March 31.

In any case, the cruise control can still be shut off by using the steering column-mounted stalk that controls the systems.

The recall is expected to begin in September. M-class owners can call Mercedes-Benz customer service at 1-800-367-6372.